“Yesterday at 7 pm, a group of unknown gunmen came from the eastern side of Malakal and attacked a village in Khor Adar called Bai Ajak killing four people and injuring two others,” Atem said.

The police officer said many residents have been displaced, adding that security organs are combing the nearby bushes to ascertain if there are more bodies or injured people in the bushes.

“The displaced people are living in a terrible situation in the bushes. We have not established how many they are but in due course, we will know,” Atem added.

He said the situation is now calm, investigations ongoing, and appealed to the government and aid agencies to intervene and rescue the displaced community.

Changkuoth Puk Deng, the Secretary-General of defunct Latjor state said they had not heard about the raid at the time RadioTamazuj contacted them. 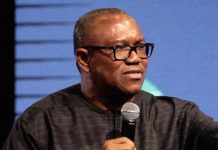 “Nigeria isn’t working because people are recruited based on sentiments” –...