The National Democratic Congress (NDC) says it will take legal action to have the Agyapa deal abrogated arguing that the agreement is not in the interest of the state.

Additionally, the party has indicated that it would embark on a number of demonstrations, dubbed “Ye gye ye sika,” to wit: “We are taking back our money” to register their displeasure and press on government to terminate the agreement.

At its 16th weekly press briefing in Accra on Tuesday, the General Secretary of the party, Asiedu Nketia demanded that “President Nana Akufo-Addo retrieves for the state the billions of cedis illegally paid under the shady Agyapa deal to Databank, within the next seven days.”

Failure by the President to do so, he said, would “make the NDC and other like-minded progressive forces, embark on series of protests and legal actions to ensure that every pesewa paid are refunded to the state for nation building.”

The party further urged the Office of the Special Prosecutor (OSP) to conduct criminal investigation into the deal and ensure that anyone who directly or indirectly played a role in the Agyapa deal, which they described as scam, faced the full rigours of the law.

According to Mr Nketia, “that is the only way we can salvage the failing fight against corruption in our country.”

The NDC, he noted, had for long held the position that the Agyapa deal was fraught with illegalities and driven by corruption, cronyism and sheer greed.

An NDC government would investigate the agreement and also punish all the culprits and masterminds behind it through the Operation Sting crusade, he added.

Mr Nketia was optimistic that the NDC would win the 2020 elections and encouraged Ghanaians to turn out in their numbers on December 7 and vote for John Mahama.

Meanwhile, Member of Parliament (MP) for Sekondi, Egyapa Mercer has indicated that the government, and as such the NPP was ready to respond to any court application regarding the contract.

Speaking at a media interview in Accra, he dared the NDC “to hit the street if they want. This transaction as the President has referred to parliament and when we come back in the eight parliament we will interrogate it and approve it if we have to.” 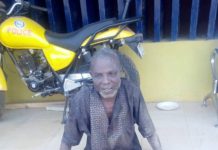 55-Year-Old Man caught with 4 Human Skulls, Hands and Jaws in...

Dr Ibrahim Awal donates to Yaa-Naa, others for Damba festival