The news that Barcelona fans across the globe have so long been waiting for has, on Tuesday evening, finally arrived.

Ongoings at the Camp Nou this past summer, even by Barca’s standards, of course proved drama-filled.

On the back of the club’s Champions League humiliation at the hands of Bayern Munich, there was a swift change on the bench, as Quique Setien was replaced by Ronald Koeman.

In turn, the likes of Luis Suarez, Ivan Rakitic, Nelson Semedo and more were all moved on.

Lionel Messi, meanwhile, shocked the footballing world late in August, in demanding an immediate exit from his long-time club.

In the end, the Blaugrana talisman was of course left with no choice but to stay put, but the feeling, over the weeks since, simply hasn’t been the same.

This unsettled atmosphere has seen Barcelona slip majorly off the early pace in La Liga, with the Catalans’ El Clasico defeat at the weekend having left them languishing in 12th in the Spanish top-flight table.

Throughout all of the drama, tears and on-pitch struggles, though, one source of widespread blame has remained – Josep Maria Bartomeu.

57-year-old Bartomeu has stood as President at the Camp Nou since 2014, but recent years, and months in particular, have seen the Spaniard heavily targeted by the Blaugrana faithful.

In fact, on the back of Messi’s attempted exit, and subsequent confirmation that the club’s leadership had proved central to his decision, Barca fans flocked to the Camp Nou, to demand Bartomeu’s resignation:

Barcelona fans have gathered outside Camp Nou and are chanting “Bartomeu out!” 😡pic.twitter.com/krYQ1Ctz6f

The months since, though, had seen the Spaniard remain firm in his stance that he would be the man to lead the Spanish giants into the future, despite the gathering of the required number of signatures to push forward with a vote of no confidence.

But, as outlined above, on Tuesday evening, Bartomeu’s resistance has finally broken.

As confirmed by a host of reliable sources, the Barcelona chief, along with the rest of the club’s board, have come to the decision to stand down with immediate effect:

Barcelona president Bartomeu resigns along with the rest of the board of directors. Story with @moillorens https://t.co/4r0nH6Ua13

An official announcement regarding the news is expected shortly.

In a further boost for the Blaugrana, meanwhile, news has also surfaced that Cristiano Ronaldo will not be fit to feature when Koeman’s men face off with Juventus in Turin tomorrow night.

Portuguese superstar Ronaldo has spent the last couple of weeks in self isolation, after testing positive for Covid-19.

And the former Real Madrid has not yet managed to shake the virus, meaning he will not be permitted to renew rivalries with Lionel Messi and co. in 24 hours’ time: 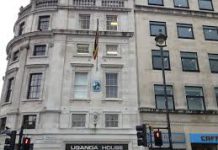 Uganda’s High Commissioner to Kenya refuses to Hand Over

Deputy Minister of Correctional Services challenges men to do more in...