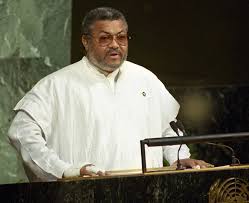 The President of Nigeria, Muhammadu Buhari’s, and one-time president of the country, Olusegun Obasanjo have condoled with the government and people of Ghana over the passage of their former president, Jerry Rawlings.

Buhari, according to his media adviser, Mr. Femi Adesina stated that the entire African continent would no doubt miss the sterling qualities of late Ghana’s great ex-leader.

According to the statement, Buhari is of the belief that the passion, discipline, and moral strength deployed by the former Ghanaian leader to reposition the country over a period of years have continued to reverberate across the continent and beyond.

The statement further stated the president commended the unique role played by the former president in strengthening political institutions in his country and Africa at large.

He added that such roles stimulated the economy for sustainable growth, adding that the late Rawlings vociferously championed the African cause by urging many leaders to work towards interdependency on the global stage, especially in areas of competitive advantage.

In corroboration to Buhari’s words, the former president of Nigeria, Olusegun Obasanjo said Jerry Rawlings, “will be remembered for his critical role in the evolvement of modern democratic Ghana”.

Going down the memory lane, Obasanjo recalled that Rawlings, who died on Thursday at the aged 73, supported and accommodated his non-governmental organization, the Africa Leadership Forum, when former Nigerian Military Leader, Sani Abacha, jailed him in 1995.

He said, “President Rawlings will be missed for his exemplary leadership across Africa but particularly for his contribution to nation-building in the Republic of Ghana where he served, first as the Military Head of State of the country from 1981 to 1992 and later as a democratically-elected President from 1992-2000.”

According to him, “It must also be on record that President Rawlings played a key role in furthering the actualization of the objectives of the Africa Leadership Forum, ALF, a non-governmental organization which I founded in 1988 to develop leadership capacities in Africa in order to increase the productivity of major actors in government, parliament, business, and civil society.

“He supported and accommodated the organization and its staff during the period of the relocation of the organization’s base to Ghana because Abacha wanted to have them destroyed just immediately after he got me arrested and imprisoned on a trumped-up charge of coup plotting in 1995.

“No doubt, his generous assistance to ALF and its staff makes me forever indebted to him. I can proudly say he was a true friend and brother. His works, values, and principles have had and will continue to have a great influence and impact in Africa and beyond.”
Former President, Jerry John Rawlings has passed on,” he said.

Meanwhile, as a mark of respect for the greatly respected nationalist, Akufo-Ado has declared a seven-day national mourning in Ghana.

The women’s role in the search and achievement of democracy in...