After seeing off Stoke City in the last round, the Lilywhites were drawn against another Championship side, Brentford, in the competition’s semi-finals.

The winners of Tuesday’s tie will face one of Manchester United or Manchester City in the finale.

That prospective clash will of course come as a tough one no matter who emerges victorious from the derby.

The city rivals have been in solid form of late, and have managed to keep the League Cup in Manchester for five years running, four of which were secured by Pep Guardiola’s Citizens.

Check out 101’s betting tips for the tie below:

Dele Alli to feature vs Brentford?

With tonight’s clash marking such an important one for Spurs, it feels safe to assume that Jose Mourinho will field a fairly strong starting eleven, despite the gap in quality between the sides.

As per a report from the Evening Standard on Tuesday, Brentford will likely have to deal with both Harry Kane and Heung-min Son.

Somewhat surprisingly, though, it is also claimed that Dele Alli is in contention to return against the Championship side.

This comes amid suggestions that Gareth Bale is not yet fit, Steven Bergwijn may be rested and both Erik Lamela and Giovani Lo Celso are unavailable: 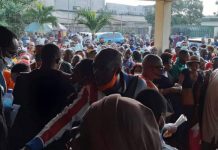 Uganda Poll: US Vows Actions Against Those ‘Undermining Democracy’