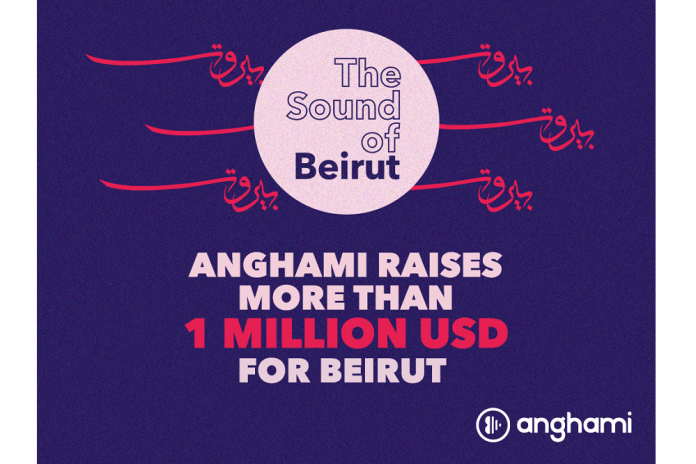 Dubai, United Arab Emirates, 16 September 2020,(AETOSWire): Beirut’s sound echoed louder than ever before on Anghami on the night of Thursday September 8, rolling out a rhythm of hope and sending messages of support to the Lebanese capital that translated into more than US$1 Million in donations.

The Sound of Beirut gathered over 30 Arab and International artists bringing together their fans from all over the world for the cause of Beirut. They took turns singing and sending heartwarming messages to the Lebanese and global community for 2 hours straight, urging users to hit that donate button and help the people of Beirut after the 4th of August explosion.

In a statement, a Procter & Gamble spokesperson said: “We have been looking at the most impactful ways to support the community on the ground, and have committed to supporting through Anghami’s initiative The Sound of Beirut and our other initiatives with a US$1 Million cash and in kind contribution.Our hope is that with collective contributions of organizations like ours, the people of Beirut will be able to rebuild and rehabilitate Lebanon.”

Ragheb Alama inaugurated the event by expressing his love for Beirut, followed by an emotional word from The Chainsmokers and a special performance of “Didi” by Khaled, which resulted in a huge boost to user engagement. International star Craig David made a noteworthy appearance, while Maya Diab performed an impressive patriotic medley. The shared love for Beirut brought together Massari and Ali Gatie who sang as a duo, followed by an intervention by Egyptian superstar Mohammed Hamaki who urged everyone to donate and sang “Adrin Naamelha” as a message of hope for the Lebanese.

Alan Walker then transported the event into another universe by greeting Beirut in his own way and pavedthe way for Emirati star Balqees who merged “Li Beirut” and “Les Yeux de la Mama”.

Moroccan international artist and producer RedOne gave everyone an extra dose of optimism with “La Moustahila”, which led to a patriotic stop with Ghassan Saliba’s rendition of “Watani Byaarifni”.

Hatem Ammor brought together the Lebanese and Moroccan worlds, welcoming Tunisian star Latifa who adopted the Lebanese dialect to sing “Amminli Bayt”. The show went on with Joseph Attieh, Aleph from 8eArt and Humood Alkhuder.

Joe Ashkar enchanted the crowd with his voice for two patriotic songs in a row, before Lebanese band Adonis took over, followed by International star Justin Jesso, and Adam from Lebanon.

Famous rapper Didine Canon took the audience to Algeria, while rapper ALA shifted the attention to Tunisia once again, sending love and support to Beirut with Sami Yusuf following in his footsteps. It was then Bebe Rexha’s turn to charm the crowd, followed by Hani Mitwasi from Jordan and Mishaal from KSA.

Abeer Nehme and DJ Regard entertained Anghami users before DJ Rodge live streamed his top hits from the Anghami Headquarters in Beirut. A special thanks went out to Rolla Safawho was the voice of the concert from beginning to end, guiding users throughout the performances.

With high levels of user engagement, the Anghami concertresulted in a remarkable amount of donations that will be distributed to the victims of the blast by Global Aid ForLebanon, in partnership with the United Nations World Food Program.

MTV aired The Sound of Beirut as it went live on Anghami. Vox Cinemas also screened the show across its theaters with ticket sales counted towards the relief funds.

The enormous artistic event which started out as a humanitarian initiative owes its success to the support of all participating artists – with the backing of Sony Music Entertainment, Universal Music, Believe Digital and the support of renownedmusic executive Wassim Sal Slaibi, who acts as Head of International Partnerships at Anghami.

Anghami will always rush to support every deserving humanitarian cause, wherever it may be, so that the sound of freedom is always heard, and the freeing beat of the music never stops.

Digital Media Services (DMS) was incorporated in 2010 as the official digital media arm of Choueiri Group. Today, the Company extends a premium portfolio of online / mobile offerings, which reach 140 million Unique Browsers, generate 1.2 Billion Page Views and serve over 3.8 billion ad impressions per month. Aligned with Choueiri Group’s commitment to and focus on digital, DMS received a brand makeover in April 2017, which expresses its unique strength as the true voice of independent publishers. DMS is headquartered in Dubai, with presence in key regional markets.

‘Our justice system has been made a mockery of,’ says PA’s...