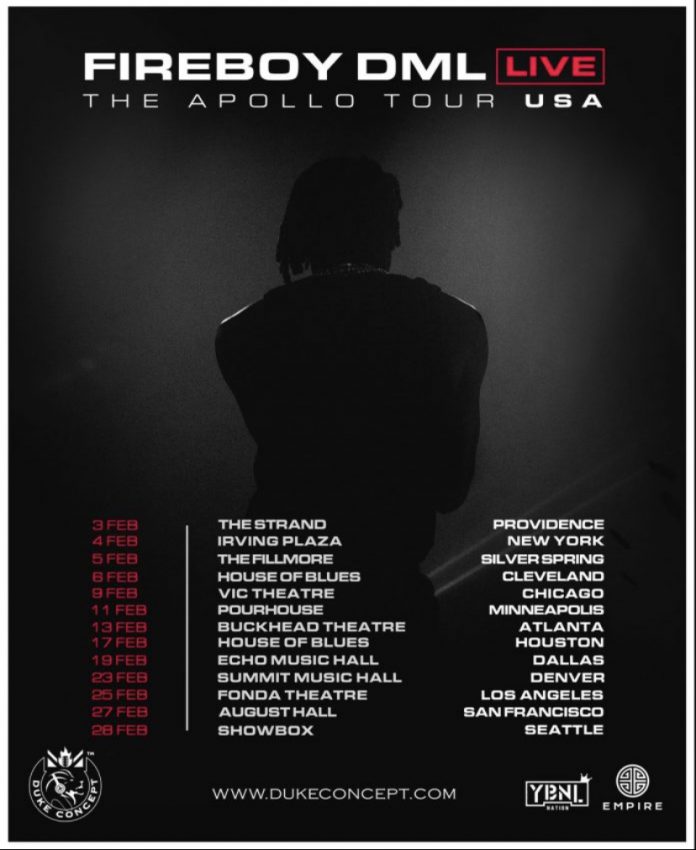 Fireboy DML under YBNL Records have said on Monday, November 22, 2021 that his debut Apollo tour is due to kick off in Providence, Rhode Island on February 3rd, 2022.

The your, he said will hit 13 cities throughout the month; including major markets like New York City, Chicago, Los Angeles and San Francisco. Apollo is the name of his critically acclaimed 2020 album.

Just 25 years old, Fireboy DML has quickly established himself as one of the top Afropop artists coming out of the continent.

Fireboy DML characterizes his music as Afro-Life; a unique blend of R&B, pop and Afrobeats with lyrical content that audiences can relate to.

Based in Nigeria, Fireboy DML found initial success with his smash hit Jealous in 2018, and later signed with Olamide’s label YBNL Nation. He’s steadily amassed a sizable following in Nigeria and throughout Africa; and in the past couple years his listenership in North America has grown dramatically.

On his 2020 album Apollo; Fireboy DML folds a diverse sonic palette into a contemporary Afropop iteration. Lyrical musings on fame, doubt and love—woven between melodic percussion from producers like Type-A—add enticing layers to the singer-songwriter’s music. Pitchfork gave the album a favorable review; lauding its “melodious, detailed, and effortless album of feel-good pop and R&B”.

The Apollo Tour is being produced by Duke Concept; the preeminent production and promotion agency for African artists touring North America. Duke Concept has brought many African artists to the US for the first time and has handled booking and logistics for some of the top African talent including Burna Boy, Davido, Tems, Wizkid, among many others. Duke Concept recently produced Burna Boy’s sold-out show at the Hollywood Bowl, making him the first African artist to headline the iconic LA venue. Duke Concept is thrilled to produce Fireboy DML’s debut headlining tour of America, which should only further establish his global audience.

Deji Adeyanju implores Davido to contest in an election