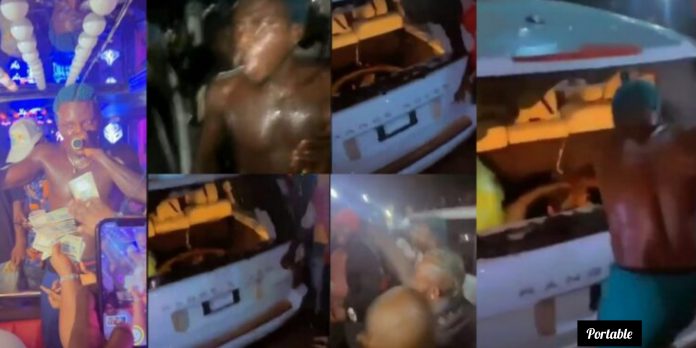 Popular Nigerian Singer, Habeeb Okikiola, popularly known as Portable had his Range Rover vandalized by hoodlums during a concert performance in Lagos.
In a trending video making rounds on social media, Portable was captured losing his temper after his car’s back glass got smashed.
Portable is seen in a fit of rage and people around him were trying to calm the situation but nobody really could tell what had gone wrong that possibly led to his car being vandalized.
Read Some reactions from netizens below ;
Keside wrote ;
But why would someone do that to another persons car?? And Portable Dey show street love.
Bright wrote ;
The lawlessness in Nigeria is so much
This is just unacceptable and wrong.
Bifa wrote ;
He shouldn’t complain much. These are the kind of fans he attracts. It comes with the territory. You can’t eat your cake and have it. Sorry though

WATCH: ‘They are stealing all the robots’ – Traffic light vandalism...

#EndSARS: Nigerian celebs call for next line of development after Lagos...

“I’ve been going through so much in my life” – Nigerian...