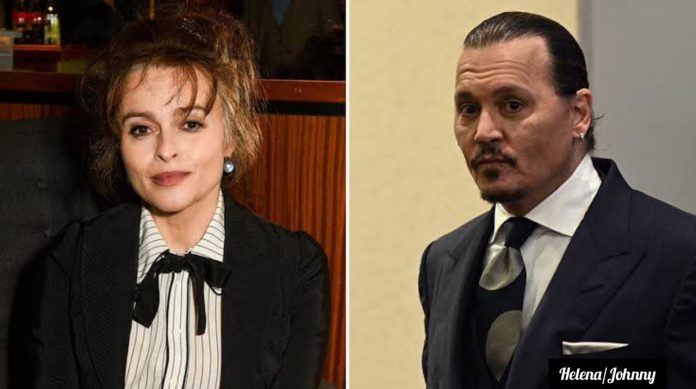 English Actress, Helena Bonham Carter has come to the defense of her longtime co-star, Johnny Depp and of Harry Potter creator, JK Rowling in a new interview.

Speaking to Newsmen, Bonham Carter said she felt Depp had been “completely vindicated” after his victory in a defamation case against ex-wife Amber Heard this summer.

Meanwhile, Depp and Bonham Carter have worked together in films such as Corpse Bride, Charlie and the Chocolate Factory, Sweeney Todd: The Demon Barber of Fleet Street, Alice in Wonderland and Dark Shadows. Depp is also godfather to Bonham Carter’s two children with former partner, Tim Burton.

When asked whether she felt the decision of the Virginia jury to award Depp $15m in the suit was a sign of the #MeToo pendulum swinging back, Bonham Carter said: “My view is that [Heard] got on that pendulum. That’s the problem with these things – that people will jump on the bandwagon because it’s the trend and to be the poster girl for it.”

Meanwhile, during the trial, Depp denied striking Heard and accused her of lying about his alcohol and drug use. In 2020, Depp lost a libel case in the UK against the Sun newspaper, which had described him as a “wife beater”.

A high court judge ruled that the paper’s allegations were “substantially true”.

Bonham Carter also expressed skepticism about whether someone’s personal life, if legal and consenting, should affect their professional prospects.

“Do you ban a genius for their sexual practices? There would be millions of people who if you looked closely enough at their personal life you would disqualify them. You can’t ban people. I hate cancel culture. It has become quite hysterical and there’s a kind of witch-hunt and a lack of understanding.”

However, she also came to the defense of JK Rowling, author of the Harry Potter books, in whose film adaptations she played Bellatrix Lestrange. Rowling has been accused of transphobia after statements around gender politics and the protection of children and vulnerable women.

“It’s horrendous, a load of bollocks,” said Bonham Carter. “I think she has been hounded.”

She continued: “It’s been taken to the extreme, the judgmentalism of people. She’s allowed her opinion, particularly if she’s suffered abuse. Everybody carries their own history of trauma and forms their opinions from that trauma and you have to respect where people come from and their pain. You don’t all have to agree on everything – that would be insane and boring. She’s not meaning it aggressively, she’s just saying something out of her own experience.”

When asked about the wisdom of the film’s three key younger stars – Daniel Radcliffe, Emma Watson and Rupert Grint – speaking out about Rowling’s remarks, Bonham Carter said: “Personally I feel they should let her have her opinions, but I think they’re very aware of protecting their own fanbase and their generation.”