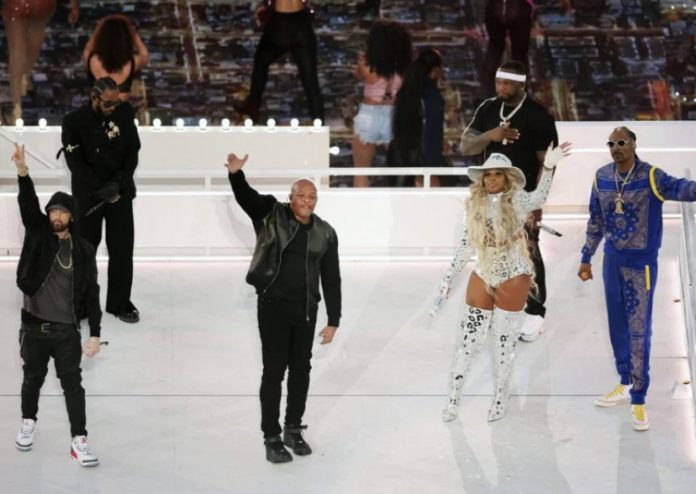 Yesterday, the crowd at the SoFi stadium, California were fascinated with back-to-back song performance from the discographies of Dr Dre, Snoop Dogg, Mary J Blige, 50 Cent, and Kendrick Lamar — the show headliners.

The 15-minute long concert of music and culture was dived into the middle-way point of the National Football League (NFL) final game of the season between the Los Angeles Rams and the Cincinnati Bengal, which the former won 23-21.

The rendition started with Dr Dre arising from the floor while seated in front of a large mixing desk.

A few minutes after of showing his magic on the presentation table, the super-producer said Snoop Dogg as the first performer.

Snoop delivered the full capacity stadium into cheers as he bring out the lyrics of ‘The Next Episode.’

Mary J Blige performed ‘Family Affair’ and ‘No More Drama‘,while Kendrick Lamar performed ‘M.A.A.D City’ and ‘Alright‘, as Eminem then stimulate the stage more with his ‘Forgot About Dre’, ‘Lose Yourself‘ songs.

Maglove replies Shatta Wale’s over allegation of being a “Witch”