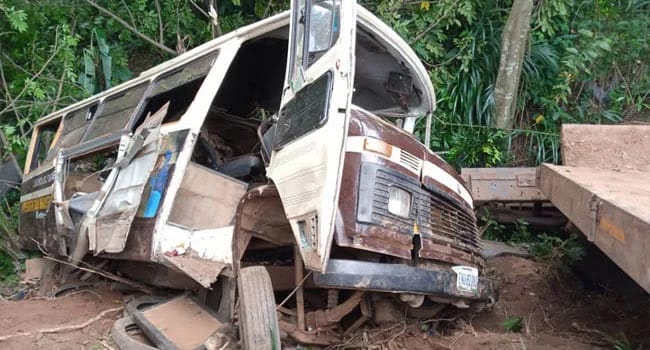 21 persons, including school children have reportedly died in the auto crash which happened in Agwu, Enugu state.

The heartbreaking incident which occurred on Wednesday, October 28 was said to have involved a school bus and a truck that had break failure.

The school bus was that of Presentation Nursery and Primary School, Awgu, operated by the Catholic Diocese of Awgu, Enugu State.

The truck belonging to a construction company hit the school bus when its break failed.

The Federal Road Safety Corps (FRSC), while confirming the incident attributed the crash to a mechanical fault.

It was gathered that the deaths included nursery primary and secondary school children. The bus was carrying a total of 52 people, including teachers.

According to Enugu Sector Commander of FRSC, Mr. Ogbonna Kalu, the accident occurred on Wednesday afternoon, while the children were returning from school.

“As I speak with you, 21 persons have been confirmed dead and more than 50 persons were in the school bus.

“Also of note is that not all the dead were schoolchildren. Those working on the roadside were part of the casualties.

“From available information, the accident was caused by dangerous driving,” Kalu disclosed.

In reaction to the incident, President Muhammadu Buhari commiserated with the bereaved families, the school and the government of Enugu State for their loss.

The statement issued out on Friday through the Special Adviser to the President on Media and Publicity, Femi Adesina, states:

“The President condoles with families and kith and kin of the dead, praying that God will grant them succour, and spare the country of such tragedy in future.

“He also commiserates with the Catholic Church of Awgu, which runs Presentation Nursery and Primary School that the pupils attended, and the Enugu State government.

“President Buhari enjoins vehicle owners to ensure roadworthiness, as initial reports attributed the accident to brake-failure by the truck involved.