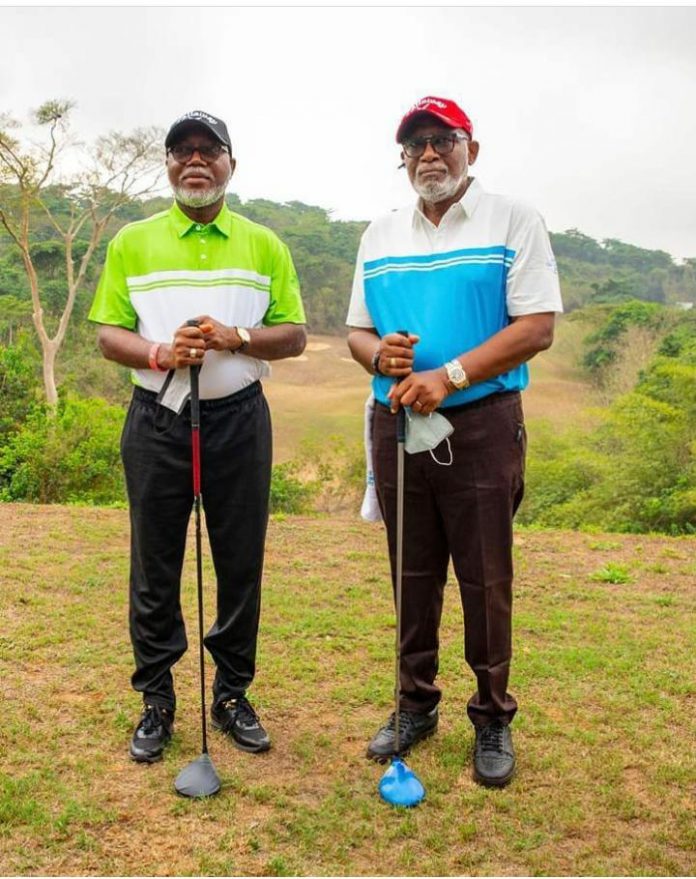 Ondo State Governor, Arakunrin Oluwarotimi Akeredolu, (SAN) has performed the ceremonial tee-off at the Golf Tournament organized by ‘Friends of Aketi’ to celebrate the successful 2nd term inauguration as the Governor.

The ceremonial tee-off was performed at the Smokin Hills Golf Resort, Ilara-Mokin in lfedore Local Government.

The Governor was accompanied by the Deputy Governor, Hon. Lucky Aiyedatiwa, his Chief of Staff, Chief Gbenga Ale, Chairman of the OSRC media Group, Mr. Kunie Adebayo, Senior Special Assistant to the Governor, Mr. Lincoln Afolabi Ojo, and others.

Addressing journalists briefly after the ceremonial tee-off, Governor Akeredolu said the game of golf is strategic to promoting tourism and showcasing the potentials of the state, particularly, to private investors.

He noted that the investment potentials of the golf course would make any government appreciate private sector contributions to the growth of the state.

The Governor described the Smokin hill as one the greatest landmarks in the state, adding that the game of golf is becoming popular judging by the number of clubs across the country and particularly, Ondo State.

Also within the state, there were Nibalola Golf Club from Ondo, Cross Creek, Akure, and the host, Smokin Hills and Golf Resorts, IlaraMokin.

Nigeria has not made progress in 40 years – Sanusi Asserts