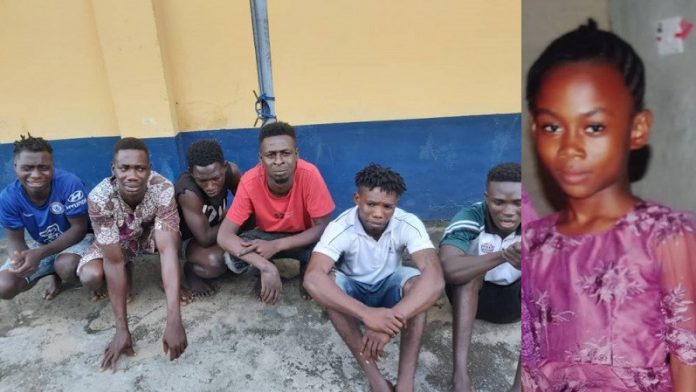 The Chief Magistrates’ Court at Ebute Meta in Lagos has remanded seven suspects who allegedly gang-raped an 11-year old girl Favour Okechukwu which led to her death.

It was gathered that Chief Magistrate O.G. Oghre did not take the plea of the suspects pending legal advice. She instead ordered the police to return the case file to the Lagos State Directorate of Public Prosecutions (DPP).

The magistrate has also reportedly granted bail to Olowookere (the second suspect) after counsel, Spurgeon Ataene, told the court of her non- involvement in the case. She was granted N500, 000 bail with two sureties each in like sum.

It should be recalled that the sad incident occurred on September 30th, 2020, when the young girl was sent on an errand by her mother to go and buy a carton of Gala for her at Olanrewaju street, Ejigbo at about 8.30pm.

After Favor failed to return home on time, it was discovered that the girl had been raped to death at No.4, Olanrewaju street Ejigbo.

The spokesperson of the State Police Command, Olumuyiwa Adedini disclosed that the body of Favor was found dead in a room that belongs to one Ajom Brimcewil Tabi at No.4, Olanrewaju Street, Ejigbo, Lagos. He added the body was found stark naked with blood flowing out of her private part.

The Magistrate adjourned the case until Nov. 18, pending legal advice.

UK PM To Self-Isolate When Not Working, After Minister’s Infection