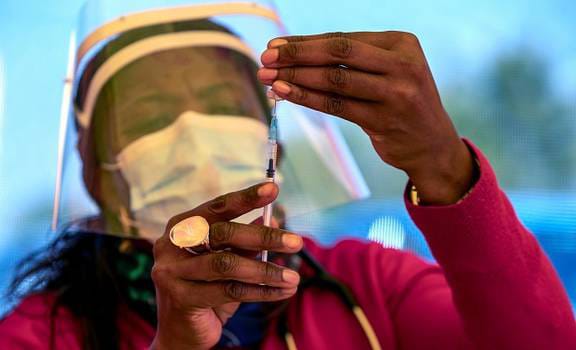 South African President Cyril Ramaphosa has announced that his country will return to stricter lockdown measures due to the sharp rise in Covid-19 cases that indicate the virus is “surging again” in Africa’s worst-affected nation.

He said some parts of the country, including the commercial hub Johannesburg and the capital city Pretoria, were now in “a third wave”.

“We do not yet know how severe this wave will be or for how long it will last,” Ramaphosa said.

Ramaphosa explained that from Monday the nighttime curfew would be extended by an hour to start at 11pm until 4am. A maximum of 100 people would be allowed at indoor social gatherings and no more than 250 at an outdoors gathering. The number of people attending funerals will be limited to 100 people and after-funeral gatherings were banned completely, Ramaphosa said. Nonessential businesses must close by 10pm.

“We have seen in other countries the tragic consequences of leaving the virus to spread unchecked,” Ramaphosa said. “We cannot let our guard down.”

According to the Africa Centres for Disease Control and Prevention, South Africa has more than 1.6 million confirmed Covid-19 cases and more than 56,000 deaths, more than 30 percent of the cases and 40 percent of the deaths recorded by all of Africa’s 54 countries. South Africa recorded 4515 new cases over the past 24 hours and Ramaphosa said the “positivity rate” among tests conducted was now “a cause for concern”.

Experts have warned that this wave, arriving with the Southern Hemisphere winter, might be even worse.

Meanwhile, the surge in cases also cast more attention on South Africa’s lagging vaccine rollout. Only around 1.5 per cent of the country’s 60 million people have received a vaccine. Health workers were the No.1 priority but less than 500,000 of the 1.2 million health workers have been vaccinated with the Johnson & Johnson one-dose shot. South Africa only began vaccinating its elderly citizens two weeks ago. In total, 963,000 South Africans had received a vaccine by Sunday, the government said, although half of those have only received the first of two required doses of the Pfizer-BioNTech vaccine.

56 military veterans due in court for holding ministers hostage

Suspected Nigerian Vendor arrested with drugs worth over N10m in India