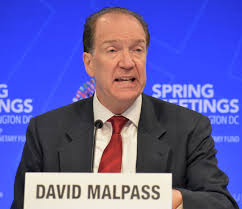 The World Bank has estimated in its new report on Wednesday, October 7, that the coronavirus pandemic would push up to 40 million people into extreme poverty in the sub-Sharan Africa.

In the report, it was stated that many of the global poor live in middle-income countries, such as India and Nigeria, where the income requirement for being non-poor is higher than the international poverty line.

The World Bank revealed that sub-Saharan Africa is the region with the largest concentration of the extreme poor, with many economies having poverty rates which is very well above the world average.

It said, “Of the 44 economies with available poverty estimates in the region, 38 have a rate of extreme poverty higher than 10 per cent. Half of the economies have poverty rates higher than 35 per cent.

“Of the 20 economies with the largest poverty rates (based on PovacalNet estimates), 18 are in sub-Saharan Africa, and two are in the Middle East and North Africa (Syria and the Republic of Yemen).”

The report disclosed that Nigeria has the largest poor population in sub-Saharan Africa, with 79 million extremely poor in 2018.

“In Nigeria, administrative areas in the north and northeast have poverty rates higher than the national average, but poverty rates are lower in areas closer to the coast.”

According to the bank’s biennial ‘Poverty and Shared Prosperity Report’, the country accounts for 20 percent of the total poor in the region.

Meanwhile, the World Bank appraisal has revealed that the coronavirus pandemic would push an additional 88 to 115 million people into extreme poverty this year, with the total rising to as many as 150 million by 2021, depending on the acuteness of the economic contraction.

The report defined extreme poverty as living on less than $1.90 a day which is likely to affect between 9.1 per cent and 9.4 per cent of the world’s population in 2020.

The report stated that many of the new poor would be in countries that already have high poverty rates.

The report said even though the decline in economic in sub-Saharan Africa was programmed to be more modest than in advanced economies, the pandemic “will likely spur one of the largest increases in extreme poverty: some 27 million to 40 million new poor, reflecting the large number of people who were living on the edge of poverty.”

The driving forces behind crypto adoption in Africa in 2022