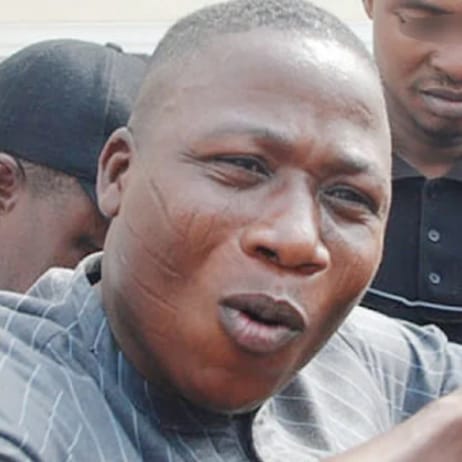 The federal government has disclosed that Yoruba Nation agitator, Sunday Igboho, is trying to obtain a new passport to escape from Nigeria after being placed on the stop-list in order to facilitate his arrest.

A person whose name is on the stop-list is deprived of particular rights, privileges, or other services he or she ought to enjoy.

In the NIS letter, the federal government alleged that Ighoho is making efforts to obtain a police extract and/or court affidavit to enable him to acquire a new Nigerian passport.

The NIS stated that the activist should be arrested whenever sighted.

“I am directed to request that you kindly place the above-named person on stop-list.

“Credible intelligence revealed that Adeyemo is making efforts to obtain a police extract and/or court affidavit to enable him acquire a new Nigerian passport, apparently to facilitate his escape out of the country.

“In addition, he should be arrested wherever and whenever sighted and referred to the Director-General, Department of State Services vide letter no: S.605/A/246 dated 05 July 2021.”

Recall that Sunday Igboho, who spearheads the separatist agitation for the Yoruba Nation, had been declared wanted by the Department of State Services on allegations of stockpiling arms to destabilise the country, which he has since denied.

Meanwhile, his whereabouts has been unknown since he narrowly escaped arrest during the July 1 midnight raid by the secret police, ahead of a major rally in support of the call for Yoruba Nation in Lagos.

The collapse of National Grid Plunges Four States into Darkness in...