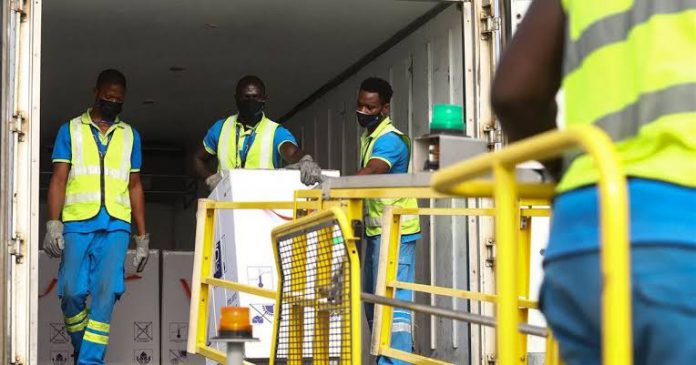 Ghana has become the first country to receive Covid-19 vaccines through the World Health Organization’s Covax Program on Wednesday, a joint statement issued by UNICEF Ghana and WHO Ghana said.

The shipment, consisting of 600,000 doses of the AstraZenaca vaccine  arrived at 7 am GMT Wednesday on an Emirates flight at Kotoka International Airport, in Ghana’s capital Accra.
The minister for health-designate, Kwaku Agyeman-Manu, led a government delegation to receive the consignment.
As the plane carrying the vaccines landed, state-run Ghana Broadcasting Corporation journalist Abdul Hayi-Moomen declared: “The flight carrying the vaccines that we so much look forward to receiving, I believe hope has arrived.”
The vaccines were produced by the Serum Institute of India, in the Indian city of Pune, and are part of the first wave of Covid-19 vaccines headed to low and middle-income countries, the joint statement added.
“Today marks the historic moment for which we have been planning and working so hard,” said UNICEF Executive Director Henrietta Fore. “With the first shipment of doses, we can make good on the promise of the COVAX facility to ensure people from less wealthy countries are not left behind in the race for life-saving vaccines.
COVAX is an international coalition set up to give equal access to the vaccine to all countries. Wealthier nations have, in the past, been accused of “hoarding” vaccines and leaving African countries behind in the race to inoculate their populations.
“We will not end the pandemic anywhere unless we end it everywhere,” said WHO Director-General Tedros Adhanom Ghebreyesus after Ghana received its vaccines.
“Today is a major first step towards realizing our shared vision of vaccine equity, but it’s just the beginning,” he added.
“We still have a lot of work to do with governments and manufacturers to ensure that vaccination of health workers and older people is underway in all countries within the first 100 days of this year,” he said in a statement issued by GAVI, the global health alliance working to increase immunization in developing nations.
The UK’s foreign secretary, Dominic Raab, described Wednesday’s rollout as a “huge step forward in ending this pandemic.”
“As one of the biggest donors to COVAX the UK is ensuring that more than one billion vaccine doses will be sent to 92 countries so that no one is left behind in this global fight. We will only save lives and reduce the risk of future infections if we prevent the virus spreading in the world’s developing countries,” he added.
Ghana’s information ministry says the vaccines will be first administered to health workers, people over 60, and those with underlying health conditions. They also plan to secure additional vaccines through external agencies, a statement from the ministry said.

Murder of popular Ibadan radio presenter confirmed by the police