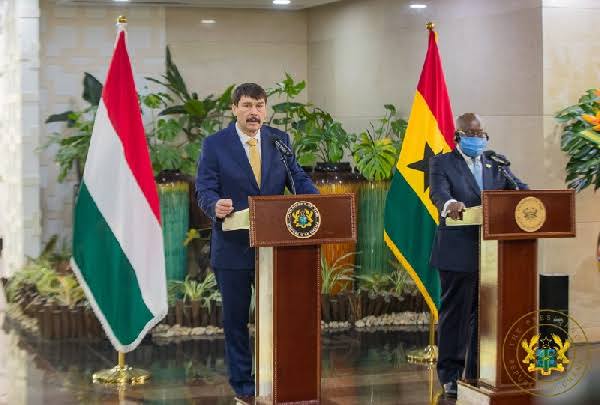 President Akufo-Addo disclosed that Ghana has been removed from the Grey List of high-risk third countries in money laundering activities.

The President made this known when he addressed a joint press conference, at Jubilee House on Thursday, 13th January 2022, with the visiting President of the Republic of Hungary, János Áder, who is on a State Visit to Ghana.

“We are delighted that, on 7th January 2022, we received a notification from the European Commission, through the intermediary of the Commissioner for Financial Services, Financial Stability and Capital Markets Union, Mairead McGuinness, that Ghana, after the pursuit of some rigorous reforms, has now, formally, been removed from the Grey List of high-risk third countries in money laundering activities,” he announced.

It should be recalled that, in 2016, Ghana was subjected to a Second Round of Mutual Evaluation by the Inter-Governmental Action Group against Money Laundering and Terrorist Financing in West Africa (GIABA).

Though the round of mutual evaluation showed some progress over an earlier one in 2009, there were still significant gaps that needed to be addressed which led to Ghana being placed under observation by the International Cooperation Review Group (ICRG).

Consequently, European Union added Ghana to its list of high-risk third countries with strategic deficiencies in their Anti-Money Laundering and Countering the Financing of Terrorism (AML/CFT) regime, in October 2020, as a direct result of Ghana being on the FATF list.

Over the last three years, an Inter-Ministerial Committee led by the Ministry of Finance had been hard at work coordinating key reforms to cure strategic AML/CFT deficiencies.

Uganda seeks to amend Airport-loan Clauses, as China takes over