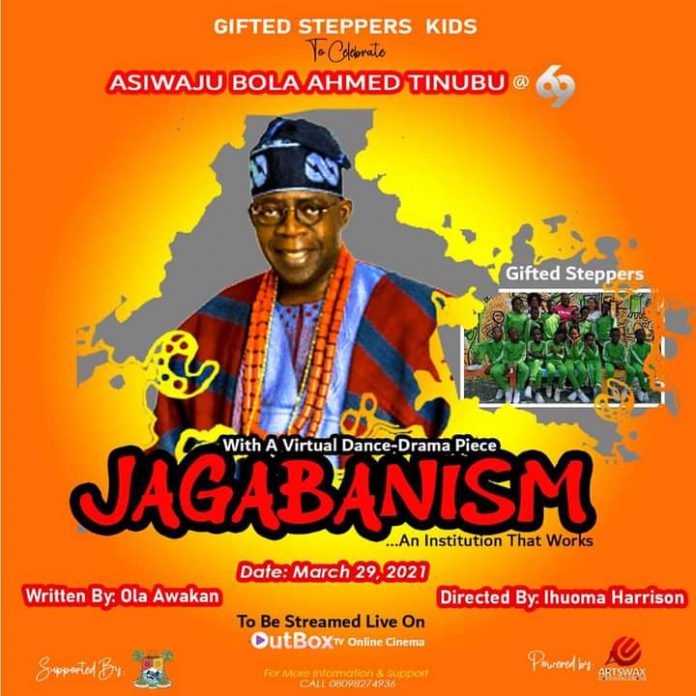 All is set as Gifted Steppers children theatre group in conjunction with Artswax Communications is to commemorate the 69th birthday of Asiwaju Bola Ahmed Tinubu with the virtual production of the dance-drama piece titled ‘Jagabanism’, directed by Ihuoma Harrison.

In an interview with the writer of the play and Creative Director of Artswax Communications, Ola Awakan, he disclosed that the piece, is produced to eulogise the Icon for his invaluable contributions to the society. The literary piece with the title ‘Jagabanism’ coined from ‘Jagaban’ will be streamed on Outbox TV from March 29 to commemorate his birthday.

While explaining the concept behind the piece, he said that the dance-drama was created to talk about the philosophy, beliefs, value system and idea that drives the Celebrator who raises political giants and talents with his message of hope and opportunities for them to shine. In his words, “Jagabanism looks at the evolution of Jagaban in Lagos politics and Nigeria generally and how he has used his philosophy and instilled them in people who have now become great minds as well as political Giants in the country. That’s what Jagabanism stands to achieve. The concept is using drama to tell the story of Asiwaju Bola Ahmed Tinubu as he celebrates his 69th birthday.”

He further explained that the underprivileged acting it are talented kids from different parts of the country who were hopeless and living on the streets. However, the good Samaritan, Ihuoma Harrison picked these children numbering about 40 from different location in Lagos in a unified location and used dance, drama, music and poetry and craft to change their lives positively.

“Now, we are using them to tell the story of Asiwaju Tinubu. We are allowing them to see that a man like Tinubu who gives hope to the Hopeless and helps to raise leaders still exist. So they are the ones telling the story which is not just from Asiwaju’s perspective alone, they are also looking at those who have enjoyed his help like Yemi Osinbajo, Raji Fashola, Akinwunmi Ambode, Rauf Aregbesola, Governor Babajide Sanwo-olu and others who have passed through the political tutelage of Jagaban”.

He also revealed that the project aims at giving back to the vulnerable as the donations from the production will enable a sizable amount go to Gifted Steppers to relieve them of economic stress. “This production is virtual and there’s a donation of #1,000 to see this production which will be available on Outbox TV from March 29th for a week. “They are going to donate #1,000 from which a reasonable amount will go to the Gifted Steppers because taking care of these kids has not been easy for the lady who is doing the work.”

“This donation will go to them to make them get a permanent accommodation while at the same time help them raise their school fees, feeding and other things. That’s why we are focusing on the vulnerable to tell the story so that people can see that there are some people who are talented but need help from the society”, he added.

He further described Asiwaju Bola Ahmed Tinubu as a builder of leaders, a father, a gentleman and political strategist of high repute who believe in good governance and love for the masses. He said the Icon is someone who believes in using institutions to build capacity of the youth in the nation. He is also identified as a personality that needs to be celebrated and emulated.

He explained that the project despite its many challenges is a dream come true. In his words, “Jagabanism was actually written two years ago but this particular one that is been staged now is a development on the one that was written earlier and the challenges were in the area of putting the production together technical wise, getting the space, getting people to believe in the vision, putting resources together, financing, mobilizing the kids who are more than 30 to do the production, getting costumes and packaging the production. It’s not about the challenges but it’s about the common goodwill after this challenge and I am happy that this production is coming to reality”.

“I was also able to get a few believer of the Asiwaju philosophy to support the vision morally and financially so we can ensure that we have a solid virtual production that anybody and everybody who sees it virtually would appreciate. We got support from the Lagos State Government, Ibrahim Odumboni and Hon. Wahab Alawiye-King and a few others”, he concluded.