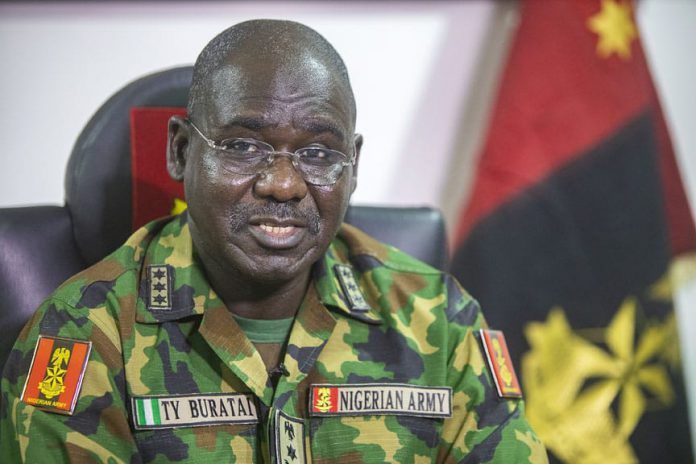 If not for the swift intervention of former Chief of Army Staff, Lt. Gen. Tukur Buratai’s letter to the Benin Republic Government, lead agitator for the actualization of ‘Yoruba Nation’, Sunday Adeyemo, popularly known as Sunday Igboho and his wife, Ropo, would have successfully fled to Germany, on Monday.

A security news platform PRNigeria exclusively gathered from credible intelligence that Buratai, a past Chief of Army Staff (COAS), was the ‘main’ brain behind Igboho’s arrest.

Igboho was fleeing Nigeria to the European nation via Benin after he had been declared wanted by the Department of State Services (DSS), last month.

The self-acclaimed secessionist leader’s house in Ibadan was raided during a clandestine operation by a combined team of security operatives and men of the DSS.

Though Igboho escaped during the raid, 12 of his men and a lady, were arrested. They have since been in detention.

An intelligence officer of Nigerian extraction in Benin, on Tuesday, told PRNigeria, in confidence that, Buratai swung into action immediately Igboho was declared wanted by a Nigerian intelligence agency.

“The ex-Army Chief knew that Igboho has the only option of first fleeing to any neighbouring African country sharing borders with Nigeria. And as Nigeria’s ambassador to Benin, which shares several borders with Nigeria, he could not be caught napping,” he said.

According to him, it was in the penultimate week that Buratai tinkered with the idea and then wrote the government of the Benin Republic.

Said the intelligence officer: “Gen. Buratai insisted on the arrest and extradition of the self-acclaimed Yoruba secessionist leader. His secret letter to the Benin government was delivered through the Nigerian Embassy in Benin lookout, asking them to be on the lookout for Igboho.”

That same Buratai’s letter, according to another intelligence officer who spoke to PRNigeria, was instrumental to the arrest of Igboho and his wife at the Cadjèhoun Airport in Cotonou, the largest city in the French-speaking country.

“Igboho was arrested in Cotonou on Monday night while he tried to travel. He was already at the airport with a passport. The immigration officers suspected the passport and so they stopped him. In the process, they discovered he was the one, and arrested him,” he said.

Before he was appointed, the Nigerian ambassador to Benin this year, Lt General Buratai was Chief of Army Staff since 2015.

He had served as Force Commander of the then reconstituted Multinational Joint Task Force (MJTNF) in 2014 under the auspices of the Lake Chad Basin Commission and the Benin Republic. His operational deployments included Military Observer at the United Nations Verification Mission in Angola, Op HARMONY IV in the Bakassi Peninsular, OP MESA, Op PULO SHIELD, Op SAFE CONDUCT, MNJTF, Op ZAMAN LAFIYA, and Op LAFIYA DOLE.