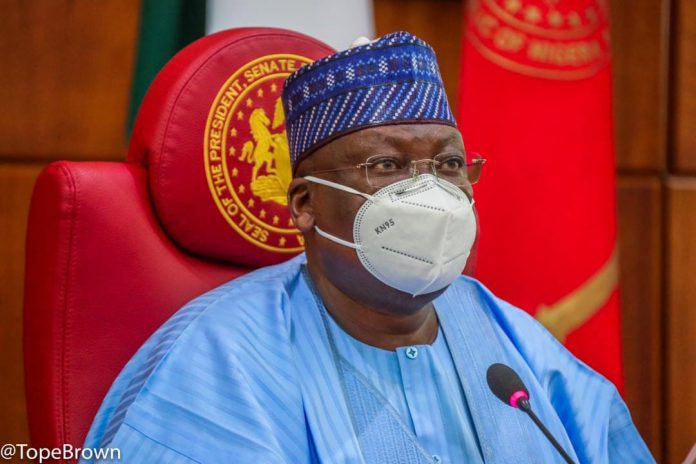 President of the Senate, Ahmad Lawan, has raised the alarm that some Ministries, Departments and Agencies of government are out to sabotage the efforts of President Muhammadu Buhari to provide critical infrastructure across the country.

According to Lawan, despite several invitations extended by the Local and Foreign Debt Committee of the Senate, the MDAs have consistently refused to appear to justify projects listed to be funded through the loan requests sought by President Buhari.

President Buhari, in another request contained in a letter, read on September 14, 2021, had sought the approval of the Senate to borrow an additional sum of USD 4,054,476,863 billion and €710 million Euros.

Buhari explained that the loan was needed to fund projects listed in the addendum to the 2018 to 2021 Federal Government external borrowing plan.

He said the projects are to be financed through sovereign loans from the World Bank, French Development Agency, China Exim Bank, International Fund for Agriculture Development (IFAD), Credit Swiss Group, and Standard Chartered, in the credit total sum of 4.5 billion dollars,710 million euros and grant component of 125 million dollars.

Reacting to the refusal by MDAs to justify projects listed to be funded by the separate loan requests, Lawan described their action as an act of sabotage that will not be condoned by the National Assembly.

He, therefore, gave the MDAs a one-week deadline to appear before the Local and Foreign Debt Committee or face appropriate action to be dealt with by the upper chamber.

The Senate President said, “List of some Ministries and agencies of the federal government that should have appeared before Senate Committee on a loan and Foreign Debts, to defend the debt request by the Executive arm of government. These MDAs failed to appear.

“The Senate considers this attitude as a sabotage to the effort of the federal government to secure the loans and fund the infrastructural development that this country desperately needs.

“Already, the National Assembly has approved the loan request, but there is a need for justification.

“I will therefore call the names of these MDAs, and we are giving them just one week to appear before the Committee on Loan and Foreign Debts.

“[And] if they fail to appear, we will take appropriate and prompt action, because this Senate will not condone any sabotage to the efforts of this administration to provide infrastructure to this country.”

25 People, including Children were killed in blast at illegal oil refinery in Rivers

UAE To Host Next Club World Cup In Early 2022

Policemen allegedly beat Driver and Vandalize his Vehicle over Refusal to...

Allegation Zamfara Govt use aircraft for gold in exchange for arms,...