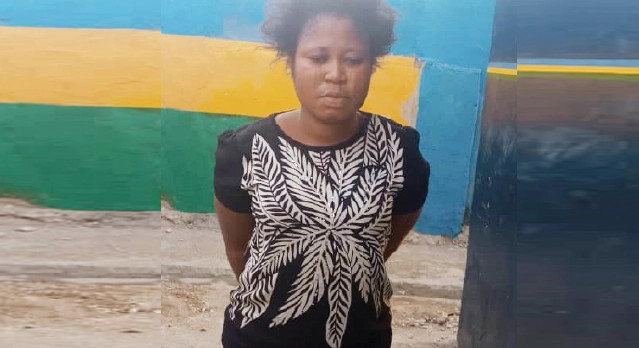 A lady identified as Mary Omifunto, has been arrested for pouring hot water on her 14-year-old daughter, Kaosarat, and inflicting burns on many parts of her body, due to her refusal to hawk.

Omifunto, who reportedly cooked rice that day because she had lots of unsold beef the previous day which she didn’t want to spoil was infuriated by her daughter’s refusal to hawk.

The mother allegedly emptied a pot of hot water on the girl after she tried hitting her with a metal object for slapping her. The incident left the primary 5 pupil scalded on her back and leg.

Omifunto was arrested after the Guidance and Counselling unit of the Oshodi-Isolo Local Government Education Authority reported the case to police at the Akinpelu Division.

Lagos police spokesperson, SP Muyiwa Adejobi confirmed the incident and also disclosed that the mother of four would be charged after investigation. He also urged parents to control their anger.

“The Commissioner of Police has condemned the act. It is surprising why someone would do such a thing to her biological daughter. The girl is in pain. It is quite unfortunate.”