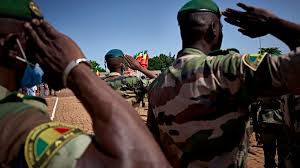 Multiple attacks carried out by suspected militants which characterize the burning down of an army base and ambushing troops sent as reinforcements killed 25 people including 13 soldiers.

According to army and local authorities, the attacks were the deadliest since the Aug. 18 military coup that overthrew President Ibrahim Boubacar Keita, and came just days after scores of jailed militants were freed by the interim government in a prisoner swap.

An army statement revealed that Nine soldiers were killed in the first attack that took place overnight against a base in Sokoura near the border with Burkina Faso.

At around 8:30 a.m. (0830 GMT) on Tuesday, three other soldiers were killed in an ambush at a bridge near the base as their unit headed to the scene of the first attack, it statement revealed.

Nine militants were killed in clashes with the reinforcement unit and two of their vehicles destroyed by the air force.

In a third assault about 40minutes later, the Mayor of nearby Bankass, Moulaye Guindo said gunmen ambushed a commercial truck, killing 12 traders and one soldier.

A witness revealed that he saw nine bodies at the military base and helped transport 20 wounded to local medical centres.

“They (jihadists) took all the vehicles and burned those they could not take away. The camp is burned,” said the witness, who pleaded anonymity.

A transitional government has been appointed since the military coup. However, lose regional and international powers fear the violence could further destabilise the West African nation and undermine a French-directed military campaign against insurgents linked to al Qaeda and Islamic State in the wider Sahel region.