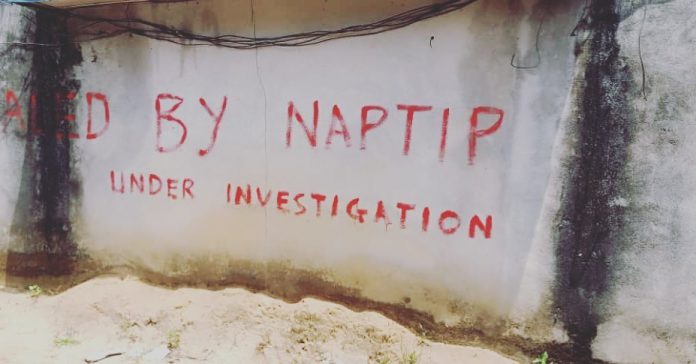 The National Agency for the Prohibition of Trafficking in Persons (NAPTIP) has shut down a baby factory in Aba, the commercial city of Abia State.

The spokesperson for the agency, Stella Nezan, who disclosed this in a statement on Monday, April 26, said three persons connected to the crime including a Nigerian-American have been arrested while a manhunt has been launched for the owner of the place, Nwamaka Ijeoma Agozie, who is on the run.

The baby factory, Nwamaka Herbal Centre, located at Ikpokwu, Ukwa West Local Government Area of Abia State was sealed by operatives of the Agency last Wednesday following the refusal of the owner to respond to invitations extended to her by the Agency.

The investigation of the baby factory followed the arrest a Nigerian-American citizen who was found with two children that she claimed to have delivered at the Nwamaka Herbal Centre but which investigations are proving otherwise. The two children are said to be twins.

The Nigerian-American had claimed to have given birth to them in March 2020 shortly after she returned from the United States of America.

According to the suspect, who also claimed to be a Pastor in the United States, she does not know the man responsible for the alleged pregnancy as she got into multiple sexual affairs in September 2018 in Amsterdam and started experiencing some strange symptoms one month later. During that period she visited a hospital in Atlanta and the Doctors said they could not identify any pregnancy in her.

After several encounters with doctors outside Nigeria who could not confirm her pregnant, she decided to come to Nigeria and seek the medical service of Mrs. Nwamaka Ijeoma.

She recounted that on the 5th March, 2020, she came to Nigeria and went to see Mrs. Ijeoma who gave her some types of medicine said to have been mixed with honey and that few hours later, she gave birth to a set of twin. She claimed to have paid a whopping sum of N2million Naira (Two Million Naira) for the delivery.

The deal however, blew open when the Nigerian-American approached the American Embassy in Abuja to procure necessary document that will enable her to leave Nigeria with the children. The Embassy doubted her claims and conducted a DNA test which proved negative. The DNA result revealed that she is not the biological mother of the children and that the babies were not even related.

The scenario has become more suspicious as the owner of the Herbal Centre where she claimed to have delivered the babies is now on the run but security agencies are now after her.

The babies are presently receiving adequate care at the shelter of the Agency while investigation continues.

Meanwhile, the Director General of NAPTIP, Imaan Sulaiman- Ibrahim, expressed displeasure with the rising cases of sales of babies and child trafficking in the country and promised thorough investigation into the case with a view to bringing to book the perpetrators.

Unlike Atiku, Tinubu Has Many Controversies Surrounding Him – Dino Melaye