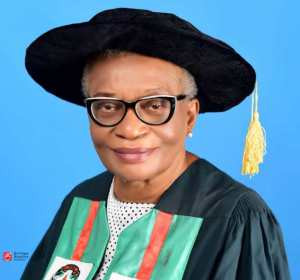 Braide, who is the 19th President of the Academy, is the Academy’s first female President in its 44 years of existence.

Professor Braide, a professor of Parasitology/Epidemiology was a member of the national committee that achieved the laudable feat of guinea worm eradication in Nigeria.

In July 2010, Professor Braide was honoured by the President of Nigeria with the award of Officer of the Order of the Federal Republic (OFR) for her contribution to disease control in Nigeria.

She is currently the Pro-Chancellor of Arthur Jarvis University, Akpabuyo, Nigeria.

She took over from Professor Mosto Onuoha FAS (Professor of pure and applied geophysics), and will lead the Academy, for the next four years, in achieving an improved quality of life for the Nigerian society through the promotion and application of science and technology; as well as strengthen the nation’s ability to deliver the fruits of science to society by the acquisition, growth, and dissemination of sound scientific knowledge and facilitation of its use in the solution of major national problems.

In her acceptance speech, Professor Braide promised to build on the achievements of her predecessor and to ensure that NAS attain its potentials.

How To Check 2021 WAEC Results Via Text Message

Rabies rampant in South Africa – and kids are at risk...