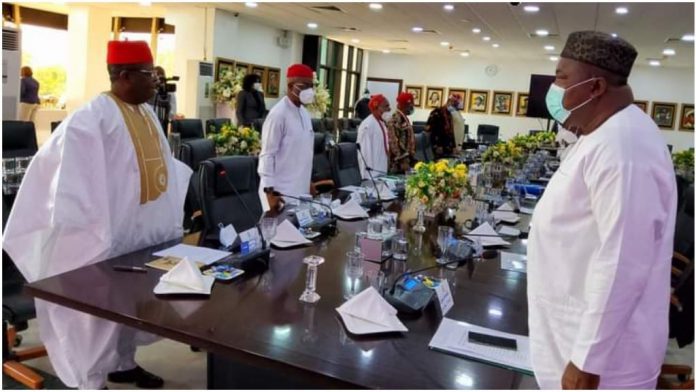 In reaction to the worsening Insecurity in the Southeast zone of Nigeria, governors, political, religious, traditional and other leaders from the region held a closed-door meeting on Sunday, April 25.

It was gathered that the meeting was convened as a response to Saturday’s attack on the hometown of Imo State Governor, Hope Uzodinma.

Coincidentally, on the same day in Imo State, the commander of the IPOB’s Eastern Security Network, ESN, Ikonso, was also killed by a combined team of security operatives.

The meeting which was held at the Enugu Government House has in attendance personalities like: the Chairman of the Forum and Ebonyi State Governor, Chief David Umahi, host Governor, Rt. Hon. Dr. Ifeanyi Ugwuanyi, Abia State Governor, Dr. Okezie Ikpeazu, chairman of the Christian Association of Nigeria, CAN, Southeast, other religions and traditional leaders, among others.

According to Daily Post, the outcome of the meeting birthed the idea that:

“South East Governors and Leaders re-stated the adoption of a common Joint Security outfit called EBUBEAGU with her Regional Headquarters in Enugu.

“EBUBEAGU will work with the Police and other security agencies in her operations to protect lives and property in South East;

“We agreed on the structure and operational modalities of EBUBEAGU and to set up an Advisory Board for the security outfit;

“The meeting is in support of restructuring, the setting up of State Police and other national issues as discussed in the last NEC meeting.

“The meeting condemns the attacks on the country home of the Governor of Imo State, His Excellency, Senator Hope Uzodimma and other State
infrastructure. We sympathize with him and call on the Federal Government to fish out the perpetrators and ensure their prosecution;

“South East Governors agreed on the implementation of various END SARS Youth Empowerment Programmes in the South East States as soon as possible.”