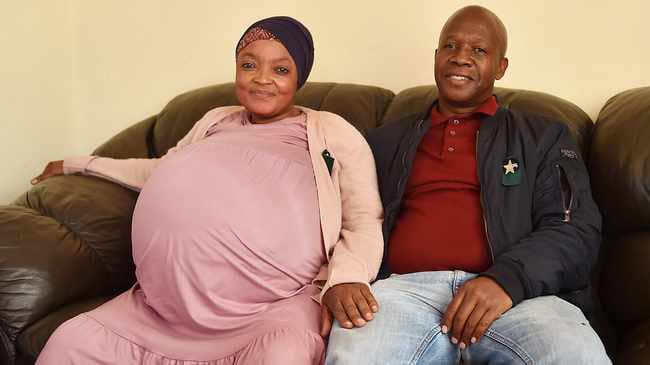 It was said the decuplets which the 37-year-old woman gave birth to was delivered under an extremely rare situation.

According to Pretoria News, Thamara’s husband, Teboho Tsotetsi confirmed the birth of the seven boys and three girls. The bundles of joy were delivered by Caesarean section at 29 weeks into the pregnancy.

“It’s seven boys and three girls. She was seven months and seven days pregnant. I am happy. I am emotional…” Tsotetsi said.

It was gathered that scans had missed two of the babies. Thamara, who has six-year-old twins, previously told the Pretoria News that her pregnancy was natural as she was not on fertility treatment.

Thamara is employed as a retail store manager while her husband, Tsotetsi is currently unemployed.

“I didn’t believe it. I doubted it. I was convinced that if it was more, it would be twins or triplets, not more than that. When the doctor told me, I took time to believe it. Even when I saw the scans I didn’t believe it. But, as time went by, I realised it was indeed true. I battled to sleep at night though.”

Tsotetsi also expressed his surprise to learn that they were expecting so many children.

“I could not believe it. I felt like one of God’s chosen children. I felt blessed to be given these kinds of blessings when many people out there need children. It’s a miracle which I appreciate. I had to go do my own research on whether a person could really conceive eight children. It was a new thing. I knew about twins, triplets and even quadruplets.”

Meanwhile, the children will spend the next few months in the incubator because they need to develop due to the complications that come with multiple births.

I’m optimistic the Twitter ban by FG will be resolved, says Lawan

I’ll keep when twitter ban will be lifted to myself –...

Man,30, arrested for defiling his 9-year-old niece in Bondo