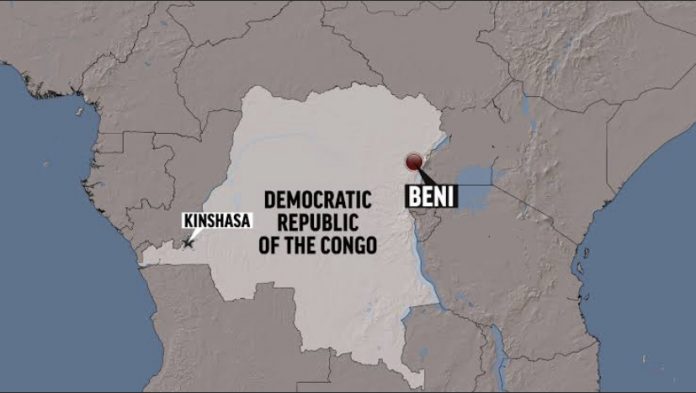 A suspected bomber was blown up when his improvised explosive device went off in a busy intersection of the Democratic Republic of Congo eastern city of Beni on Sunday.

Authorities said that was the second blast in Beni on the same day.

No one was killed in the two incidents apart from the suspected bomber in the second blast.

Earlier on Sunday, another explosive device was detonated in a Catholic church in Beni, injuring several people. No one has claimed responsibility.

Beni’s mayor Colonel Narcisse Kashale Muteba disclosed a curfew has been declared in the city of more than 230,000 over concerns that there could be another bomb.

“I’m asking the population to take shelter and remain indoors. I don’t want to see anyone outside,” Muteba said on Congo’s RTR private radio.

“There was no damage, only the transporter of the bomb died on the spot,” he said.

Beni resident Kalinda Kule Malemo said he was praying with a cousin when a loud explosion shook the neighbourhood. He said he tried to flee but because of the panic and traffic jam, he was stuck with other panic-stricken residents in a bar.

The government has blamed the Congo’s Allied Democratic Forces (ADF) – which has publicly aligned itself with Islamic State – for the bombings.

The government said that pressure from the army following a state of siege that was declared in the two restive eastern provinces had forced the jihadist group to resort to “cowardly attacks”.

United Nations experts said in a report on June 16 that the ADF was getting better at making bombs using expertise from fighters recruited from East Africa. However, it said it did not find evidence of direct support by Islamic State for an Islamist militia in eastern Congo.