Reports identified the suspect as a 21-year-old man from Tunisia.

During a brief statement to comment on the horrific event, Macron said France was struck by an “Islamist terrorist attack.”

Macron traveled to Nice following the violent attack to show support for the victims’ families.

“Once again this morning, it was three of our compatriots who fell in Nice,” he said.

The French president said that his country is under attack.

“I want to say here first and foremost the support of the whole nation for Catholics, from France and elsewhere. After the assassinaton of Father Hamel in August 2016, it is once again the Catholics who are attacked in our country,” Macron added.

The French president also ordered the deployment of 4,000 military personnel to protect churches, places of worship, and schools.

Anzorov killed Paty after the teacher displayed offensive caricatures of Prophet Muhammad during a middle school lesson on freedom of speech.

Macron denounced Islamic separatists, saying that France will not give up its cartoons.

Several countries condemned the attacks, both against Paty and in Nice, emphasizing that nothing justifies the violent murders.

Russia said it is unacceptable to kill individuals, but acknowledged that it is wrong to insult the feelings of religious believers.

In addition to arresting the culprit of the Nice attack, France’s police killed a man in Avignon after he threatened a passerby with a knife.

Saudi Arabia also arrested a man who attacked a guard at the French consulate in Jeddah with a sharp tool. The attack caused the guard minor injuries, Saudi Arabia announced. 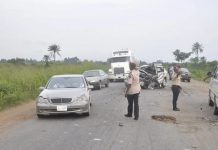 Morocco Only Arab, African Nation to Assist US Election Monitoring