Arsenal have been linked with a move for Real Madrid’s Isco. But is he the right man for the Mikel Arteta?

Isco’s situation at Real Madrid has not been a positive one for some time. With the Spaniard looking for more minutes it is likely he will therefore seek a move away from the club in January.

The 28-year old has seen opportunities in the first team at Los Blancos become less and less frequent. Real Madrid boss Zinedine Zidane has even started to put further emphasis on younger players such as Martin Odegaard in comparison to the Spanish attacking midfielder.

Spanish outlet AS has reported that Isco wants to leave to find more regular game time ahead of the European Championships which were delayed until 2021. The report reveals that Arsenal are have entered last-minute discussions with the player about a possible loan deal whereby he would join at the beginning of January becoming immediately available for Mikel Arteta.

Isco had seemingly wanted to remain in Spain and specifically with Sevilla, which is close to his hometown club of Malaga. However, the option to move to the Premier League and test his skills in England could give the 28 year-old a better opportunity of convincing Luis Enrique that he is worthy of selection for this summer’s tournament.

The idea of Arsenal signing Isco on a permanent deal is not one which would suit The Gunners at this point in time. Arsenal have spent significant amounts of money on players which ultimately have not shown their true value reflected in the fee the club paid.

Still under contract, if Arsenal were to pursue the Spaniard on a long-term permanent deal it would of course cost the club a significant fee. For a player who is nearing his 30th birthday, just two seasons away, any fee paid would unlikely be fully or even part-recouped should Arsenal look to sell the Spaniard in the future.

Therefore, a six-month loan deal for Arsenal is a very astute piece of business which would only see the Spaniard play for the latter part of the season. There were reports that Real Madrid would also be willing to subsidize some of the players wages saving, Arsenal further money.

Arsenal interest in Isco is genuine.

Would be a half-season loan but very early stages and depends on several factors.

Madrid would have to pay a percentage of his wage and even then it would be dependent on Arsenal shifting at least one out first.

But they are keen. #AFC

This would mean that any possible signing, which could not be done in January, for a more marquee, younger player, would be able to be postponed until the summer where Arsenal will arguably have more money to spend considering the amount of players which are leaving with the expiration of their contracts.

Isco would provide Arteta with the senior experience and quality of a player that is much needed in the Arsenal team considering Mesut Ozil has been exiled from the Premier League and Europa League squads.

LIVERPOOL, ENGLAND – OCTOBER 30: Mesut Ozil of Arsenal during the Carabao Cup Round of 16 match between Liverpool and Arsenal at Anfield on October 30, 2019 in Liverpool, England. (Photo by Robbie Jay Barratt – AMA/Getty Images)

It would also not block the path of a player such as Emile Smith Rowe, who has looked very promising since starting against Chelsea in the 3-1 win. Should the youngster continue his fine form, The Gunners would not have invested money in a permanent deal for a player in a similar position and could therefore put more stock in Smith-Rowe next season.

Join Nick Bright and Adrian Clarke, as they react to our one-goal win over… 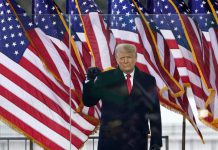 Donald Trump sets up “Office Of The Former President”

Tottenham understood to have put Kane & Son contract talks on...

Kieran Tierney is a doubt and Pierre Emerick-Aubameyang is out as...