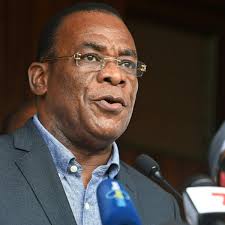 Wife and spokeswoman of an Ivory Coast opposition leader, who also happens to be a former Prime Minister, Pascal Affi N’Guessan, reported that he was arrested on Saturday, November 7, for creating a rival government after President Alassane Ouattara’s election victory.

According to the wife, Angeline Kili, who spoke to Reuters, she said Affi was arrested overnight after the public prosecutor confirmed on Friday that he was being sought by the police.

“I confirm that my husband was arrested during the night but I don’t know where he is right now,” she said.

Genevieve Goetzinger, a spokeswoman for Affi, said on Twitter he was arrested in the southeastern town of Akoupe while en route to his hometown of Bongouanou.

The police are yet to be available for comment.

Meanwhile, Ivorian prosecutors are pursuing terrorism charges against more than a dozen opposition leaders who boycotted the Oct. 31 vote in which Ouattara won a third term in office and announced they were creating a transitional council.

The standoff has raised fears of protracted instability in the world’s top cocoa producer, whose disputed 2010 presidential election led to a brief civil war. More than 40 people have died in clashes before and since the latest vote.

The opposition claims Ouattara has violated the constitution by seeking a third term. Ouattara says approval of a new constitution in 2016 restarted his mandate and allowed him to run again.

Affi served as prime minister from 2000-2003 under President Laurent Gbagbo, whose refusal to concede defeat to Ouattara after the 2010 election sparked a civil war that killed 3,000 people.

Baby Declared Dead by Pharmacist Wakes up as He was about...