In something of a surprise move at the time, Cristiano Ronaldo joined Juventus in the summer of 2018.

The Italian powerhouse are understood to have paid around £100m to bring the elite attacker to Turin.

Ronaldo has since gone on to enjoy a fine stint with Juve, notching 71 goals and 19 assists in 94 outings across all competitions.

The former Manchester United star has also helped guide the Bianconeri to two Serie A titles, and the Supercoppa Italiana in 2018.

However, Juventus were of course already dominating domestically before Ronaldo arrived, with the Old Lady having no doubt been hopeful that the veteran would instead help them to achieve success in Europe.

Since his move to Turin, though, the Italian champions have been pretty average in Europe, crashing out of the Champions League at the quarter-final and last-16 stages in the last two seasons respectively.

Juventus’ Portuguese forward Cristiano Ronaldo celebrates after scoring a goal during the Italian Serie A football match between Juventus and Lazio, on July 20, 2020 at the Allianz stadium, in Turin, northern Italy. (Photo by Isabella BONOTTO / AFP) (Photo by ISABELLA BONOTTO/AFP via Getty Images)

Ronaldo, now 35, has just under two years remaining on his current Juventus contract.

And whilst some fans may be hopeful of the 167-time capped international seeing out the full length of this deal, recent speculation from Spain suggests that this may not prove to be the case.

Like most clubs, Juventus were not immune to the effects of the Covid-19 pandemic, with Ronaldo and co. having taken a four-month pay-cut back in March.

However, it appears as though the Bianconeri are still struggling somewhat financially, and, according to Spanish outlet Sport, the €31m-a-season which Ronaldo currently earns is becoming ‘unaffordable’.

Sport therefore suggest that Juve, rather than renewing Ronaldo’s contract, are instead considering putting the Portuguese up for sale next summer, in an attempt to recoup some of the cash paid to Real Madrid back in 2018.

See also: Mourinho believes Tottenham could be champions ‘in many European countries’ 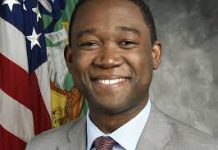 BREAKING: Maina Returns To Nigeria After Arrest In Niger Republic

Arsenal’s Nicolas Pepe admits to being unhappy over lack of playing...