Liverpool are set to return to Champions League action in just over 24 hours’ time.

The Reds kicked off their European campaign in Amsterdam last week, scraping a narrow 1-0 win against Ajax.

But Jurgen Klopp’s men now, on paper at least, face a much more straightforward test, in the form of FC Midtjylland.

The Merseysiders are set to welcome the Danish outfit to Anfield on Tuesday evening, for what should be a fairly routine win.

Whilst Liverpool were picking up a key three points in the Netherlands last week, Midtjylland were being hammered 4-0 by Serie A outfit, Atalanta.

This result, of course, means that it is the Italians who head into this week’s action top of Group D, thanks to their superior goal difference.

Ahead of his side’s meeting with Midtjylland, Jurgen Klopp held his pre-match press conference on Monday, alongside Liverpool no.1 Alisson.

The German discussed a number of topics in the presser, one of which surrounded the latest on his squad.

Klopp was drawn on whether he is set to welcome any of the club’s stars back, or any others have been ruled out, ahead of Tuesday’s game:

“Not as far as I know… nobody told me yet. I don’t know exactly, probably nobody added but we didn’t lose anybody as well.”

The Liverpool boss was then specifically drawn on the availability of Thiago Alcantara, Naby Keita and Joel Matip against Midtjylland.

The news, though, was not exactly positive, with Klopp having suggested that all three are once again likely to miss out:

“Don’t think so. It’s still what I said last week, we look day by day.

“It looks like we will need a few more days. For tomorrow night, they probably will not be ready.”

Jürgen Klopp reported no fresh injury concerns ahead of our @ChampionsLeague clash with @fcmidtjylland.#LFC | #UCL 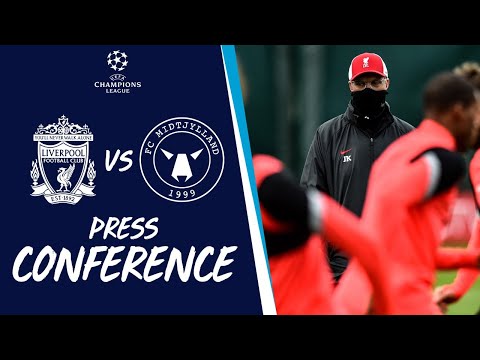 Watch as the boss, Jürgen Klopp, and a member of his first team squad…

Video: The Puskas Award nominees have been chosen but who should...