Aside Kotoko breaking their ‘One-goal project’ run in their last five encounters, they created enough scoring chances to bury their opponents under a heap of goals.

Kwame Opoku’s early brace in the 10th and 18th minutes won the day for the Porcupine Warriors.

This increased Opoku’s goal tally to five on the goal king log and kept him in touching distance of WAFA’s Daniel Lomotey who leads with seven and Karela’s Diawise Taylor who follows with six goals.

Kotoko’s Brazilian import, Fabio Gama, marked an impressive debut to earn an assist that made him a talking point amongst fans and journalist at the stadium and across various social media platforms.

The host’s incessant attacking game right from the onset unsettled Liberty and kept the ‘Scientific Soccer lads’ on the back foot.

They lived dangerously under Kotoko’s pressure and finally succumbed in the 10th minute to Opoku’s first goal.

After some good work from Gama, he released the ball to Emmanuel Sarkodie who located Opoku with his cross inside the Liberty area. Opoku struck the ball which deflected off a Liberty defender for the opener.

Liberty nearly responded swiftly through Paul Kwame, but the defender blasted wide from a corner kick.

Kotoko’s constant harassment of the visitors’ backline paid off as they added a second.  Opoku showed his brilliance after he was put through by Gama; he skipped past two Liberty players before cheekily chipping over Liberty goalie Kofi Baah.

In an attempt to reduce the deficit for his side before the break, Liberty’s Simon Asamoah pounced on a pass from midfield but his well-timed shot was punched away by Kotoko shot-stopper Razak Abalora.

After recess the game which started on an electrifying note slowly ebbed into a sloppy affair with both sides showing early signs of fatigue.

Liberty found their composure and attempted to rally a comeback but lacked the cutting edge to break the Porcupines’ defence.

One of the worst culprits was substitute George Ansong who kept over hitting his opportunities to the relief of Kotoko.

Even though Kotoko lacked the fervor they possessed from the onset they still provided nervy occasions for the visitors and created chances to add a third goal which was squandered by Kwame Opoku and William Opoku Mensah.

Gama nearly capped his befitting debut with a goal in the 73rd minute but he headed feebly into the hands of Baah after he was left unmarked in the Liberty box.

Frank Lampard assures there is ‘no doubt’ Hudson-Odoi will be handed... 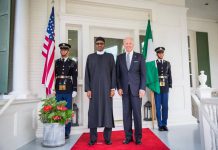 We’re looking forward to working with Biden and Harris – Nigerian...

Stakeholders of Peace Int’l urges Ghanaians to be patriotic