It has emerged from a virtual African National Congress (ANC) media conference that Ace Magashule will not step aside as party secretary-general until the National Executive Committee (NEC) has discussed the matter. This follows the Hawks’ confirmation that Magashule’s arrest is imminent.

The ANC had resolved that members facing criminal charges should step aside to protect the image of the organisation.

Magashule’s imminent arrest relates to his alleged involvement in the irregular awarding of the R255 million asbestos contract while he was the premier in the Free State.

He will hand himself over to the police on Friday morning before his appearance at the Bloemfontein Magistrate’s Court.

ANC virtually briefs media on developments within the party:

The pro-Ace Magashule group has, meanwhile, accused the anti-Magashule group of sowing divisions in the ANC. This follows a march led by former Free State ANC Treasurer Mxolisi Dukwana calling for Magashule to step down following reports of his imminent arrest on corruption charges.

The group has handed a memorandum of grievances at the Free State government headquarters in Bloemfontein.

Supporters of Magashule have accused Dukwana and other members, who recently marched to ANC headquarters in Johannesburg, of having been paid to destabilise the movement.

One of Magashule’s supporters Mduduzi Nkambule says, “I don’t know what we can call this. This is a group of just a few people who happen to know some individual even before Nasrec. They got money, and they got access to transport that’s why you see them. They can’t even answer those questions. So, they are here to just show the broader that is happening in the ANC. Some of them, we know the leaders of this faction today, are the people whom their names are in those leaked documents of the CR17.”

The National Prosecuting Authority (NPA) in the Free State says more arrests are imminent in the multi-million-rand asbestos case.

Seven accused appeared briefly in the Bloemfontein Regional Court earlier on Wednesday on charges of corruption, fraud and money laundering. They stand accused of involvement in the irregular awarding of the R255 million asbestos tender.

The seven accused include former Mangaung Metro Executive Mayor, Olly Mlamleli and businessman Edwin Sodi. The accused face more than 60 charges for the irregular awarding of the tender in 2013.

The tender relates to the assessment and eradication of asbestos roof houses in the Free State.

Mlamleli, who was the Free State MEC for Human Settlement at the time the tender was awarded, also addressed her supporters outside court, telling them she has pleaded not guilty.

Beneficiaries of the asbestos tender also came in court to voice their frustrations.

“I sleep in a room that has an open roof. I even use clothing material to close where there are gaps. It’s difficult and sometimes when I try eating I feel like vomiting. My chest is forever painful because of the conditions I live under. I am not happy at all.”

The state has prepared an indictment meaning that the matter will eventually be transferred to the Regional High Court. The matter has been postponed to February the 19th next year.

‘ANC not concerned about motion of no confidence against President Ramaphosa’

SABC expected to respond to CWU’s demands by midday 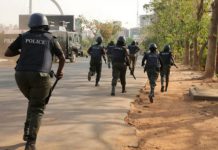