The first phase of the project, which consists of a 550 metre overpass linking the Graphic Road and the Dr Busia Highway (Kaneshie Mallam Road) including storm drains, was completed five months ahead of schedule.

The storm drains drainage system is expected to help to address the flooding challenges experienced by residents and motorists during the rainy seasons.

President Akufo-Addo indicated that the completion of phase one of the Obetsebi Lamptey interchange showed the seriousness his administration attached to addressing the congestion in some of the major cities of the country.

President Akufo-Addo, who inaugurated the project as part of his two-day campaign tour of the Greater Accra Region said under his administration, five interchanges were being constructed simultaneously and urged Ghanaians to extend his mandate due to its commitment to building the country’s infrastructure.

“This is the first time in our nation’s history that more than five interchanges are being constructed within the first term of any government. So if there is any reason to give Nana four more to do more for you, this is one of them,” he said.

He said the Pokuase Interchange, the first four-tier interchange in West Africa, was 85 per cent complete and noted that sections of the interchange would be opened to traffic this week.

The Tamale Interchange, which was also the first interchange in northern Ghana, is 54 per cent complete, and was on course to be completed by the first quarter of 2021, he said.

President Akufo-Addo reiterated that his administration was working assiduously to address traffic congestion challenges in Accra and all other major cities in the country.

As part of his two-day campaign tour of the region, the President visited the Kaneshie Market and the Kokompe Market all in the Okaikwei South Constituency, where he interacted with spare parts traders, traders, market women and residents.

He also made stops at the Abeka Market in the Okaikwei Central Constituency and the Anyaa Market and Santa Maria in the Anyaa Sowutuom Constituency and engaged traders, drivers and other constituents including chiefs, identifiable groups and residents.

As at press time President Akufo-Addo was about to speak at a whistle stop at Ofankor in the Trobo Constituency in Accra. 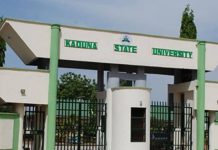 Review: Dunsin Oyekan – The Gospel of The Kingdom