As schools plan to reopen next week, some two families in Ugenya and Ugunja sub-counties in Siaya are worried about the fate of their children who went missing during the lengthy period that schools were closed.

The family of Mama Mary Osodo Alando of Sidindi trading center in Ugunja sub-county now lives in agony following the mysterious disappearance of their 12-year-old grandaughter who went missing in September.

According to Mama Mary, the Class 5 pupil at Sidindi primary school left home on September 7 and is yet to return home.

Her whereabouts to date remain unknown.

She told Radio Ramogi that the little girl had been spotted near Simenya and taken to the Simenya police station before the officers at the station took her to Ugunja children’s services offices where she again disappeared.

Attempts to trace her up to Butula, Bumala and Busia where she could have gone to have proven to be an exercise in futility.

The family told the police that they had received a call from a stranger informing them that the girl was doing alright and was living between Uhulo and Sega.

The family is appealing to the public to volunteer any information that may lead to the reunion of the girl with her family.

Elsewhere, the family of Maurine Atieno in Ugenya has not seen their 11-year-old son who went missing on December 4.

The family is also appealing to anyone who may have seen the boy to volunteer information to any police station.

Probe as man dies after complaining of chest pains during sex 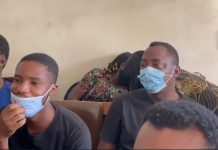 NMS now pushes relocation of matatus from CBD to January 2021