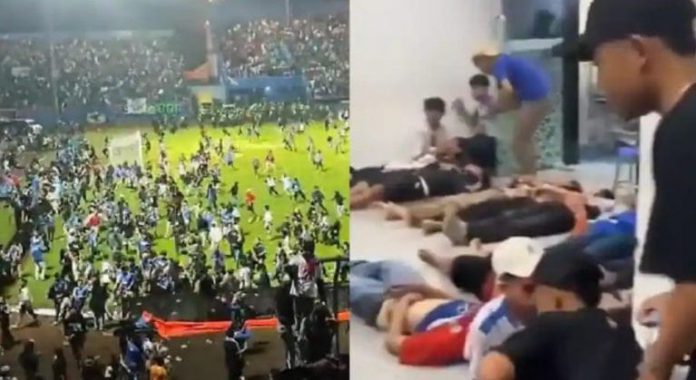 At least 174 people have died and almost 200 more have been injured in a stampede at an Indonesian football match.

The tragedy occurred after police fired tear gas at fans who had invaded the pitch following Arema FC’s home defeat to bitter rivals Persebaya Surabaya.
Videos show thousands of supporters attacking police vehicles in the wake of the 3-2 defeat, while local reports claim that several of the Arema players who were still on the pitch were also attacked.
Police responded by firing tear gas into the crowd, sparking a panic that saw fans surge towards the exit at the Kanjuruhan Stadium.
Many of those supporters subsequently suffocated or were reportedly trampled to death, with hundreds being rushed to hospital and many dying either en route or in treatment.
A doctor told local media that a five-year-old was among those who had died, while two police officers are also thought to have lost their lives.
“We have already done a preventive action before finally firing the tear gas as (fans) began to attack the police, acting anarchically and burning vehicles,” East Java police chief Nico Afinta said in a press conference on Sunday.
However, FIFA regulations state that no firearms or crowd control gas should be carried or used by police inside stadiums.
Overcrowding is also understood to have been a contributing factor, with Indonesia chief security minister Mahfud MD claiming that 42,000 tickets had been issued for the 38,000-seater venue.
Indonesian president Joko Widodo ordered that all matches in the country should be postponed until the investigation is concluded, while also stressing the need to prevent further disasters in the future.
“I deeply regret this tragedy and I hope this is the last soccer tragedy in this country. Don’t let another human tragedy like this happen in the future,” he said in a press conference.
“We must continue to maintain sportsmanship, humanity and a sense of brotherhood of the Indonesian nation.”
Arema FC have been banned from hosting matches for the remainder of the campaign, while further sanctions are also likely to follow.
At least 11 of those injured are thought to be in serious condition, meaning that the death toll could still climb from the latest official figure.
The tragedy appears to have already led to the second-highest death count ever seen in a football stadium disaster, behind only the 1964 crush at the Estadio Nacional during a game between Peru and Argentina which left 328 people dead.

Anwiafutu: Body of boy retrieved in mining pit after drowning in...