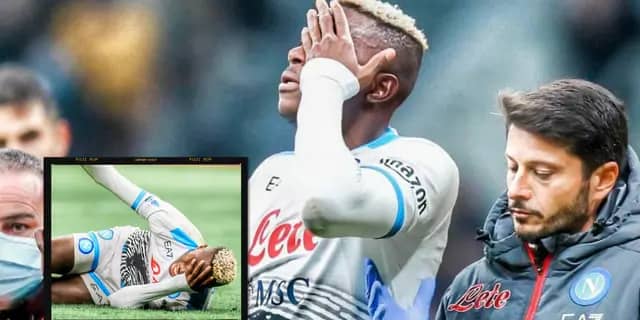 Professor Gianpaolo Tartaro has suggested that it is unlikely that Napoli striker Victor Osimhen will kick a ball in Cameroon even if he joins the Nigerian team to the 2021 Africa Cup of Nations next month.

Tartaro is the surgeon who operated on Victor Osimhen’s face in November after the 22-year-old suffered multiple facial fractures during a clash of heads with an Inter Milan player in a Serie A tie.

At the end of the complicated but successful operation, the ex-Wolfsburg signing was ruled out of action for three months to heal his wounds fully.

Osimhen remarkably returned to individual training a few weeks after his surgery and was included in Nigeria’s 28-man Afcon squad list on Christmas eve.

The 2015 U-17 World Cup winner is presently in Nigeria for the holidays. Still, he is scheduled for a medical checkup in Naples on Friday to ascertain the extent of his healing via a computerized tomography (CT) scan.

And Doctor Tartaro, who will oversee the checkup, insists that he expects Osimhen to stay away from a football pitch for at least another month unless a miracle happens during the festive season.

“For the formation of the callus bone, according to world protocols, it takes from sixty to ninety days. Unless a biological miracle,” the plastic surgeon told Corriere Dello Sport, as per Tutto Napoli.

“If he does not do the CT scan, we will not be able to dissolve the prognosis. Reduced fractures must consolidate: I repeat, for the formation of the callus, you have to wait two or three months unless a Christmas biological miracle: but biology is not a fan.”
Osimhen was a fringe member of the Super Eagles squad that won a bronze medal at the 2019 Afcon, where Odion Ighalo emerged as the top goalscorer with five goals.