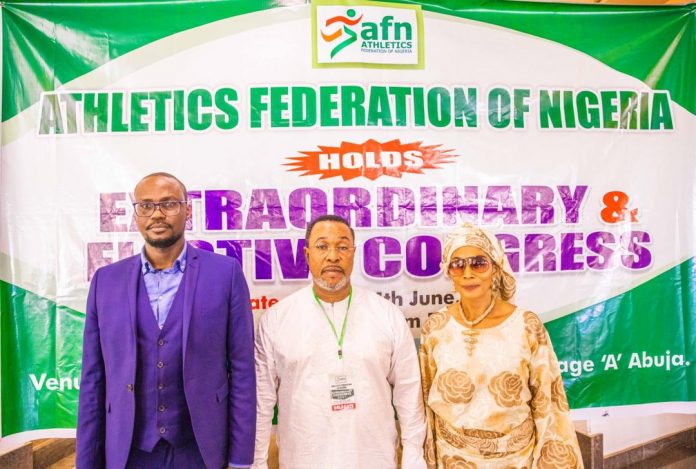 Newly elected president, Athletics Federation of Nigeria (AFN), Tonobok Okowa has said that the World Athletics (WA) and the Confederation of African Athletics (CAA) recognise their elections conducted on Monday at the Moshood Abiola Stadium, Abuja.

Tonobok Okowa was elected AFN President unopposed with 41 votes while Gadzama and Rosa Collins emerged First and Second Vice-presidents with 42 and 43 votes respectively.

The Chairman, Delta State Sports Commission said despite having WA and CAA backing he will still reach out to Shehu Gusau-led board to see need to work together for interest of the game.

“I am going to reach out to the other faction and let them understand that we need to work together. It’s not about fighting for position, it’s all about achievements. I know there has been problem but we will look into what caused the problems and see what we can do to resolve it. But I know that where I am is where the World Athletics and Confederation of African Athletics belong”,he said

Elated Tonobok said his emergence as the president is to take up responsibility and put everything in place for in preparing for the Olympics.

He said, “I feel very good because I know that we’ve worked so hard to get to this point. We have won and as far as I am concerned it’s not the time to talk it’s all about preparing.

He added, “Every promise that we’ve given, we have to work hard to achieve it. First of all it’s all about the athletes and coaches to make sure we give them enabling environment to succeed.”

Meanwhile, Shehu Gusau was also elected unopposed in another AFN election conducted in Kebbi State on Monday. In both elections, there were no members of World Athletics and Confederation of African Athletics at their election venues.

Rage festival, a super-spreader event in the making, warns expert

Dominance of State FA Chairmen In NFF Board Unacceptable – Baribote