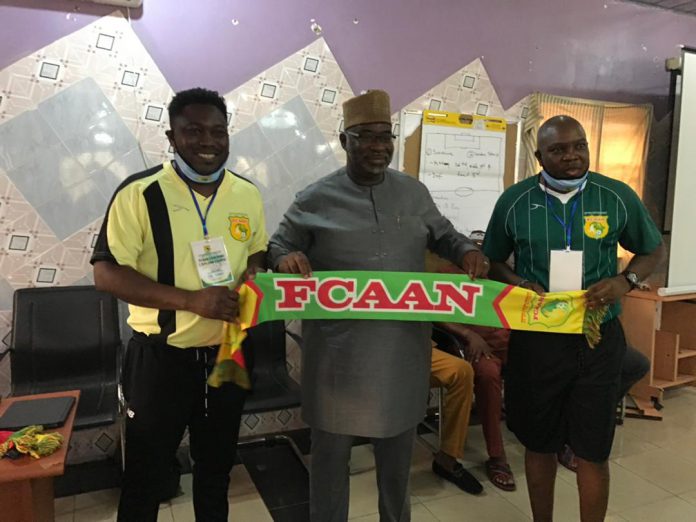 The first vice president of the Nigrria football federation NFF Barr Seyi Akinwunmi has commended the Football coaches Association of African Nations FCAAN for it’s efforts towards developing Nigerian coaches which he believes will rub positively on Nigeria football.

Akinwunmi stated this when he visited the venue of the ongoing C diploma course of FCAAN in Akure.

The seasoned administrator was in company of top football administrators in Ekiti and Ondo state. He said he has never doubted the capability of Nigeria coaches in handling the affairs of the country’s football.

The NFF number two man who spent time with the coaches in class during match analysis session could not hide is feelings when he was told that FCAAN coaches are now being exported abroad with ountries like Oman, Indian, Benin Republic amongst others benefiting. 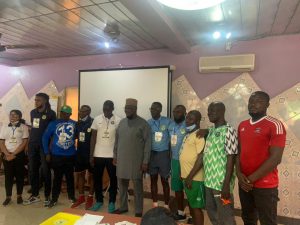 Akinwunmi who had never hide is love for youth and developmental aspect of the beautiful game also said what FCAAN is doing will help develop the country football which is parts of the core agenda of Amaju pinnick led administration of the Nigeria football federation NFF.

The FA chairman of Ekiti state. Mr Bayo Lanlege also described what FCAAN is doing as lofty. He said exposing Nigerian coaches to modern technical know how of the game will help the growth of the game.

In his response FCAAN president DR Terry Eguaoje thanked the NFF leadership for the show of love extended to the coaching education body.

He said better coaches means better players. He further said the FCAAN curriculum and methodology was critically designed to build football culture for the country.

The FCAAN boss who is the consultant coaching and development to NFF also reiterated the need to have indegineous coaches directing the affairs of Nigeria’s football.

The course ongoing in Akure ondo state Capital will end on Saturday 22nd with about 100 coaches from in and outside Nigeria to be licensed for the C diploma.

Two Reasons Why Adeleye Is Tipped To Shine In Israeli League...