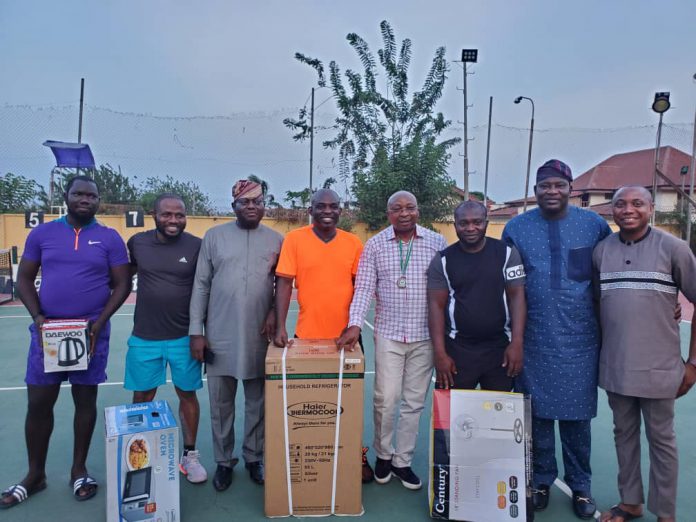 An in-house tennis tournament organized by the Osogbo Tennis Club (OTC), in honour of Ambassador Adejare Bello, Nigerian Ambassador to Mexico, ended at the weekend in Osogbo amidst funfair.

The two-week long competition which was staggered, featured 15 members of the club who slugged it out with one another.

Speaking at the well attended occasion, the President of the Club,Mr Adekunle Ogedengbe and the Captain, Mr Abiodun Jegede, respectively, said the tourney was organised to celebrate former speaker of the State House of Assembly over his appointment as an Ambassador.

In addition, Ogedengbe and Jegede maintained that the competition would go a long way in enhancing the game of tennis in the state.

On his part Adejare who is also the club’s BoT Chairman, commended the exco for deeming it fit to honour him with the tourney, assuring of his readiness to always promote sports and things that could enhance the unity of Nigeria.

He said sports at any level, could serve as powerful tool for bonding, urging stakeholders particularly the private sector, to invest in it.

Others in attendance include elders and members of the club as well as the former Captain of Akure Tennis Club, Prince Adeolu Akinwumi.

Tonto Dikeh clears Bobrisky on why she was arrested in Dubai

Moroccans stage culture display at the Africities Summit in Kisumu