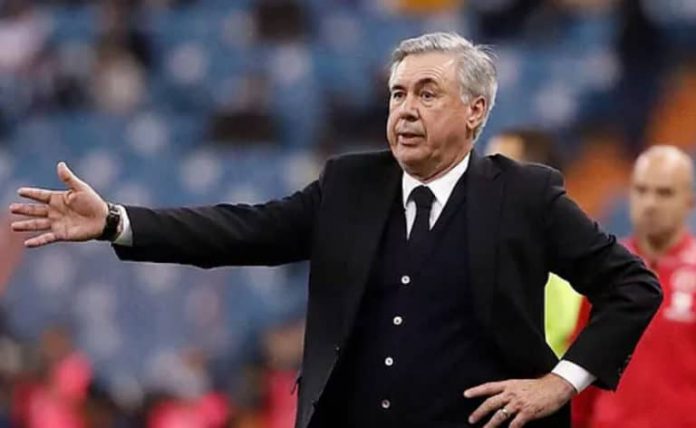 Carlo Ancelotti said on Monday Real Madrid will not under-estimate Chelsea in the second leg of their Champions League quarter-final and dismissed Thomas Tuchel’s suggestion the tie is over.

Ancelotti insisted Madrid will be taking nothing for granted at the Santiago Bernabeu on Tuesday(Today) against his former club as they try to finish the job and reach the semi-finals.

“Chelsea are here to bring the fight to us. It will be tough for them of course but they will try. Good teams never give up,” Ancelotti said in a press conference.

Chelsea delivered the perfect response last weekend by thrashing Southampton 6-0 in the Premier League and might take encouragement from Barcelona thrashing Madrid 4-0 only three weeks ago.

“I know my players very well,” said Ancelotti. “They are well aware of what happened a few weeks ago (against Barca) and what is required tomorrow. We won’t be under-estimating anyone. This is a great opportunity to reach the semis but Chelsea are a very good team. We have to respect them.”

“It’s the only way we can prepare for this game, thinking that Chelsea will be better tomorrow and be ready. There is no other way. We are ready. We know we will have to suffer and we are ready to suffer,” Ancelotti added.

Real Madrid midfielder Casemiro said he thought they delivered their “best 90 minutes of our season” against Chelsea in the first leg. “But we can’t afford to be over-confident,” he added.

Ancelotti’s future at Real Madrid was thrown into doubt after the Clasico humiliation but three wins in a row since, including the victory over Chelsea, has eased the pressure. Real Madrid are 12 points clear at the top of La Liga.

Asked if he expects still to be coach next season, Ancelotti said: “I hope so. I have a relatively long contract (until 2024) but that’s not what I’m thinking about right now. If the club are happy with me, great. If not, I will be grateful for the opportunity I got to manage Real Madrid again.”

Karim Benzema scored a hat-trick against Chelsea last week, with the Frenchman now on 42 goals in 42 games this season. His scintillating form comes in stark contrast to Chelsea’s Romelu Lukaku, who cost the club 115 million euros ($125 million) last summer but has fallen out of favour under Tuchel.

Load shedding is back, stage 2 to kick in Wednesday and...