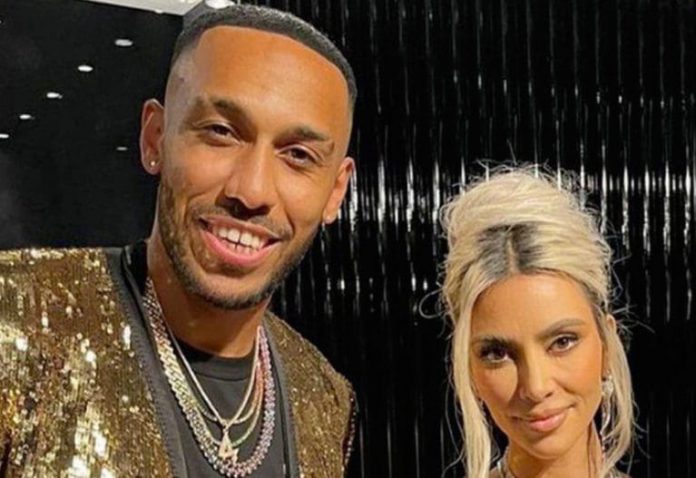 Pierre-Emerick Aubameyang has been pictured chilling with Kim Kardashian at a Dolce & Gabbana fashion show in Italy.

The Chelsea striker and his wife, Alysha attended the designer’s SS23 show in Milan over the weekend as he enjoyed some time off during the international break. Having retired from international football back in May, Aubameyang has not been included in Gabon’s latest squad and instead has plenty of free time in the absence of domestic club football.
He and his wife attended the show on Saturday wearing matching black and white outfits emblazoned with D&G logos, with Aubameyang’s tracksuit complemented by his wife’s skirt and long-sleeve top.

Paparazzi snapped a series of pictures of the couple before they later bumped into global superstar Kardashian, with whom they posed for snaps.

The Aubameyangs are also understood to have attended a second Milan Fashion Week event again on Sunday night as they continued their break in the Italian city.

The 33-year-old forward returned to the Premier League on transfer deadline day, sealing a late move to Stamford Bridge just seven months after leaving Arsenal.
He has yet to score in his first two appearances for the Blues, with the manager that signed him, Thomas Tuchel, having already been sacked and replaced by Graham Potter.

Following back-to-back postponements, Potter is set to take charge of his first league match as Chelsea boss this coming weekend when the Blues travel to Crystal Palace.

Aubameyang will be hoping to open his account for the club at Selhurst Park having established an impressive record against the Eagles during his time at Arsenal.

In his seven previous appearances against Palace, Aubameyang has scored four times and lost just once, with one of those goals coming in his last meeting with Saturday’s opponents in October last year.

Asaba 2022 Will Produce Athletes For Next Paris 2024 Olympic – Dare

The Fruits of Life in Egypt: Stories from a Fakahani

“I Will Work With Whoever Emerges As NFF President” – Amaju...