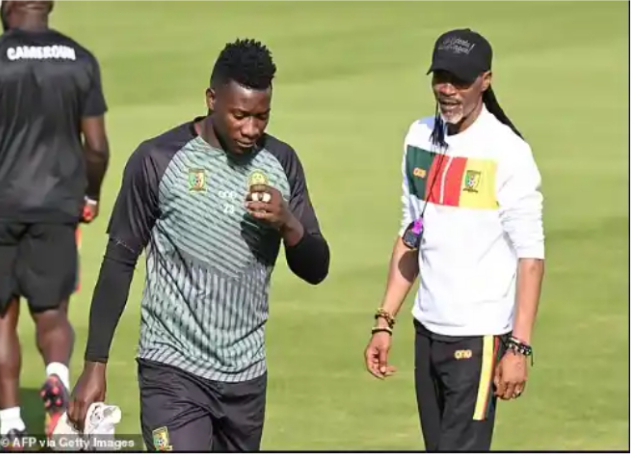 Cameroon’s, Goalkeeper Andre Onana has been sent home from the country’s World Cup squad after he reportedly had a blazing row with manager Rigobert Song.

The Inter Milan star is said to have clashed with his coach Song over the keeper’s style of play.

He was replaced by Devis Epassy, who plays his club football for Abha in Saudi Arabia, with the decision coming just hours before Cameroon’s crucial World Cup clash with Serbia in Group G which they drew 3 – 3.

According to reports from Helena Condis Edo, Onana sees his relationship with the team as ‘irreversible’ despite attempts by Cameroon Football Federation president, and legendary striker Samuel Eto’o to mediate peace talks.

Marca claims the argument came after Song shouted at the keeper during training for taking too many risks playing with his feet.

The coach wanted him to play in a more conventional fashion and was unhappy with the way the keeper advanced off his line. It was later decided that Onana should leave the squad and will play no further part in the tournament.

Pele: Brazil legend says he is ‘strong with a lot of...