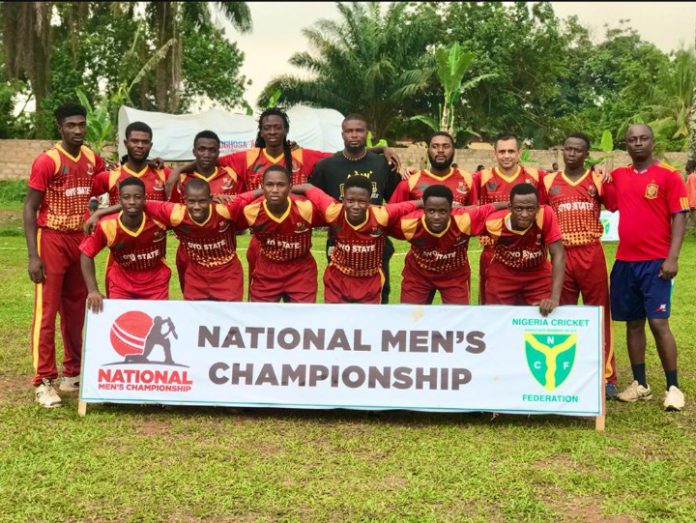 Edo State male cricket team rose above the tides of their counterpart from Oyo state in the semi-final of the 2021 National Men’s Championship, winning by 46 runs.

Edo State who first exposed the deficiency in the Lagos State team during the pool A’ group games of the Cricket National Men’s Championship and managed to qualify only on Net Run Rate, faced an Oyo team who were flawless in qualifying from Pool B’ beating all and sundry along the way.

Feared already, Oyo State further boosted their strength when National Team Player, Ovais Yusuf was included in the semi-final game, adding layers of solidity to the bating line up.

Edo State won the toss and elected to bat first, pacing their innings gradually, they eventually managed a total of 185 runs for the loss of 5 wickets in 50 overs.

Akhere Isesele scored 38 runs off 54 balls, strongly supported by Eghosa Aghedo with 31 runs off 62 balls as the best bating figures for Team Edo.

Chima Akachukwu of Oyo got 3 wickets, conceding 42 runs in 10 overs, while Elijah Olaleye got 2 wickets for 24 runs, 2 maidens in 10 overs.

In the second innings, Oyo State failed to get going in their run chase as the bowling attack from Edo State was tidy and precise.

Oyo surprisingly was 12 runs after 9 overs with 2 wickets down.

Suleimon Runsewe fought hard but could not find a dependable partner which led to the collapse of the bating line up to leave Oyo State finishing at 139 runs all out in 42.1 overs.

Useni Prosper got 2 wickets for 21 runs with 2 maidens in 9 overs.

Eghosa Aghedo was named player of the match with his 31 runs, 2 wickets and 3 catches on the day.

Edo State will now battle Kaduna State in the final of the competition.

This psychologist believes you are to blame if you marry into...

“Studio 88”: Where Cairenes Reimagine the Power of Art