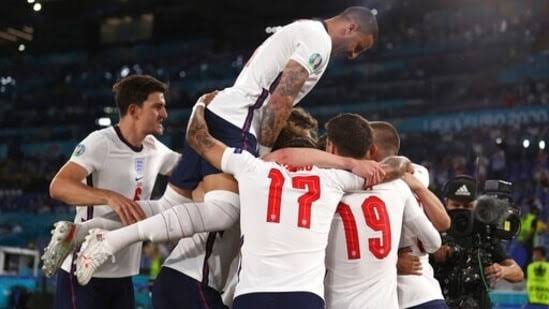 With every passing game, England kept growing in confidence and cohesion and with last night’s performance against Ukraine, one should start taking them serious, maybe it’s finally coming home as they’ve been singing all along.

Best defensive record so far at the competition, having kept a clean sheet in each of their five games including the quarter-final whitewashing of Ukraine, the Three Lions looks like they’ll finally gets to lay their hands on the Euros.

Harry Kane was back to his predatory best after struggling in the group stage, following up his goal against Germany by poking home a superb pass from Raheem Sterling after only four minutes.

Harry Maguire powered home a header from Luke Shaw’s free-kick seconds after the break to make it 2-0, and the outstanding Shaw was the creator once more four minutes later with a perfect cross that was headed in from six yards by Kane.

Substitute Jordan Henderson got England’s fourth, his first international goal, in his 62nd appearance when he arrived with perfect timing to head in Mason Mount’s corner.

Having travelled to Italy for the quarter-final against Ukraine, they will now return to Wembley on Wednesday for a last four tie against Denmark.

Meanwhile, Denmark’s impressive and emotional Euro 2020 campaign continued as they marched on to the semi-finals courtesy of a victory over the Czech Republic in Baku.

The Danes have gone from strength to strength in the tournament since the trauma of their opening game, in which midfielder Christian Eriksen suffered a cardiac arrest.

They led from the fifth minute, when Thomas Delaney evaded his marker to head in from a corner.

A continual threat on the break, they made it 2-0 just before half-time, with Kasper Dolberg volleying in a superb cross from Joakim Maehle to add to the two goals he scored against Wales.

Their momentum was checked early in the second half as Patrik Schick coolly volleyed in his fifth goal of the tournament, taking him level with Portugal’s Cristiano Ronaldo in the race for the Golden Boot.

But Denmark were able to recompose themselves and dig in to ensure the victory.

Take advantage of the good prices being offered and sell your...

Could Waluś sue for unlawful incarceration? Maybe, but he just wants...

TotalEnergies about to submit its application to drill for gas along...

Rohr Continues Search For Eagles No. 10