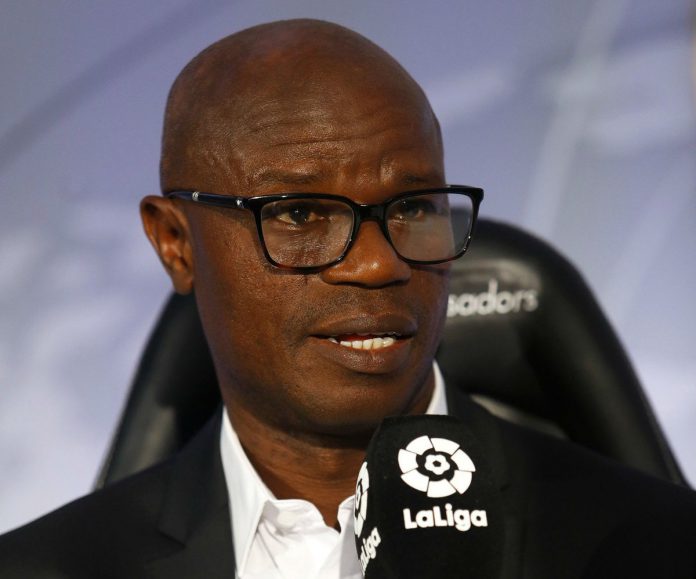 Former Super Eagles and Racing de Santander of Spain superstar, Mutiu Adepoju has sensationally declared how challenging it was quitting professional football after several years in the game.

When asked what life was like after his professional career, the former midfield dazzler who was a special guest at the Ex-University of Ibadan Footballers’ Association’s interactive monthly program – Guest of the Month, declared unambiguously, ‘Immediately after leaving football, it wasn’t very easy at all, not because of anything but it’s depressing when you stop playing football and you realize that you can’t go for training every day again nor travel for matches every week again”.

According to him, he had to wake up to reality and make the time count. “So I had to look for something else to do, did my coaching courses and football administration courses. Notwithstanding that, it was a difficult period. Nevertheless, I thank God for life and for everything”, he said.

Speaking further in a no-holds-barred manner, Adepoju, who spent most of his career in Spain, amassing a total of 175 games and 22 goals over the course of seven La Liga seasons representing mainly Racing de Santander and Real Sociedad, affirmed his efforts to advance the game in Nigeria.

According to him, “I have been doing that (advancement) for quite a long time. After retirement from the game, I came home to manage Shooting Stars and brought ideas from Spain to manage the team. At the moment as a La Liga Ambassador, we are doing a lot in Nigeria; we have a partnership with NPFL, we organize lectures and train young Nigerian coaches every year and organize under 16 tournaments too.

These are part of the developments we are bringing to Nigeria’, he said.

Born about 50 years ago, Adepoju was a member of the Nigerian team that played in the 1989 FIFA World Youth Championship in the kingdom of Saudi Arabia, where the team recorded an amazing feat of coming back from 4 goals down in a quarter-final match against the former USSR before rallying back to draw level and eventually won through a penalty shootout.

The match created a footballing record as Nigeria became the first team to come back from four goals down to equalize and then go on to win a FIFA World Cup match at any level.

The USSR match and his brace against the United States (which featured Kasey Keller in goal) in the semi-finals remain two of his proudest moments in the game. According to one of the heroes of the Damman Miracle, “I have so many happy moments.

Damman miracle was one, the final of the competition is also another; scoring two goals in the semi-finals against the US is also one. Even in the Super Eagles, qualifying for the World cup for the first time in 1994, winning the Nations Cup in 1994, and even getting to the final of the 2000 Nations Cup in Lagos are memories I will not forget in a life time”, he quipped.

Speaking further, the Headmaster, as he was fondly called during his playing days, still feels the pains from losing the 2000 AFCON final to Cameroon in Lagos. According to him, “Talking about bad moments: losing the final of the 2000 Nations Cup in Lagos through penalty and getting injured in extra time and sitting out of action for 3 months at my club are some of the sad moments of my career’’.

Mutiu Adepoju has 48 caps for Nigeria and scored six goals in his 12 years with the Nigerian national team.

He made his debut against Togo in August 1990, but his breakthrough came during the 1992 Africa Cup of Nations. He was massive in Nigeria winning the 1994 edition in Tunisia.

He was equally massive for the Eagles at the USA ‘94 World Cup and was also part of the squads to the FIFA World Cups in 1998 – where he scored a brilliant header in a 3–2 win against Spain– and 2002, although he did not play in the latter tournament.

Couple electrocuted to Death a day after Honeymoon

Jurgen Klopp provides Fabinho & Alisson updates ahead of Liverpool vs...