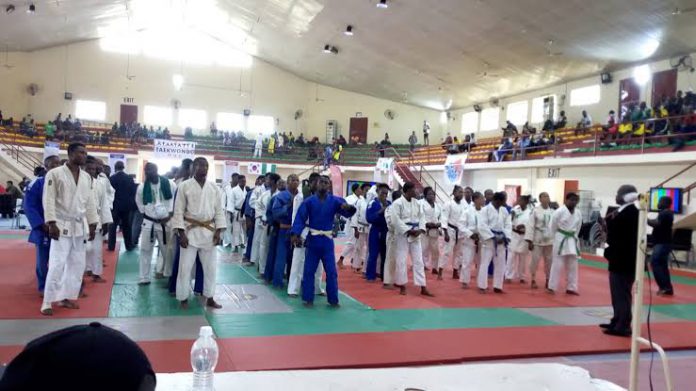 The National Trials ahead of the 2022 Commonwealth Games organised for the Nigerian judokas by Dr Musa Oshodi-led Nigeria Judo Federation gets underway at the Teslim Balogun Stadium in Surulere, Lagos on Tuesday.

The trials, which ends on Friday, will see judokas from all the states in Nigeria including the Federal Capital Territory (FCT), Abuja in attendance.

On Tuesday, which has been set aside for the arrival of the judokas and officials, Molade Okoya-Thomas Sports Hall of the Teslim Balogun Stadium was a beehive of activities with delegates from states jostling to have their registration in the trials which has never happened in the history of the sport in the country.

The president of the federation, Dr Oshodi said the organisers expected a full house from the states across the country as the trials stand the only platform to select athletes who will dorn the colours of Nigeria at the Commonwealth Games which holds in Birmingham, United Kingdom from 28 July – 8 August 2022.

The tournament proper starts on Wednesday with the judokas contesting for seven weight categories in both the men and women.

The local organizing committee headed by the Vice President of the federation, Mrs Loveth Howell has promised a hitch free trials as all necessary logistics to ensure that the judokas have a good tournament have since put in place.

While soliciting for the support of the media in publicizing the activities of the newly elected board of Nigeria Judo Federation, Dr Oshodi assures that the narrative of a game which has witnessed doldrums has changed as his board would leave nothing to chance to ensure that it breath new life into the Nigerian judo.

“Our primary assignment is to make judokas happy by organizing many tournaments, and good welfare package.

“Henceforth, judokas won’t be training without reasons for it.

“After this trials, we will call winners in these categories to camp where they continue the drills for the Commonwealth Games,” Oshodi said.