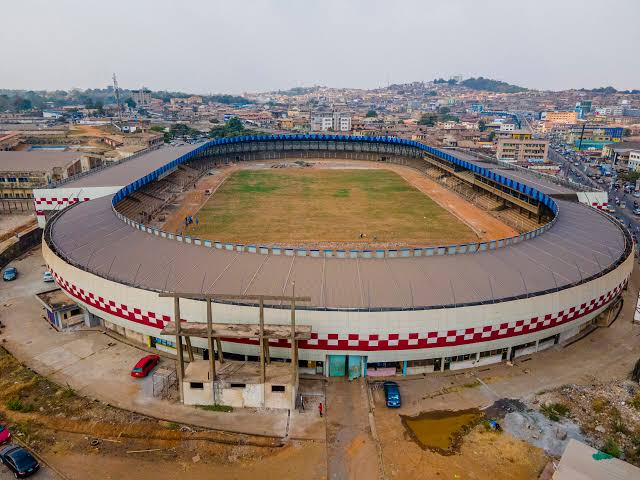 Oyo state government has commenced remodeling of the stadium some months back and it is expected to be completed in the next few months.

Speaking with Tribunesport exclusively during his inspection of the facilities along with the Gov,Seyi Makinde,the NFF President said he was impressed with the work done so far and believed that the stadium on completion will get CAF and FIFA approval.

According to him,”with the state of the arts facilities bern put in place at d Stadium,it will be one of the best in the country.It has all what it takes to host international matches and as observed there is need to have like four hospitality suites and I have suggested to the contractor to make this available once it is done,even Uyo Stadium wil not be in its class again,and that will make Lekan Salami Stadium one of the best and if not the best “,he said.

Speaking further, NFF president who also commended the state governor for his contribution to sports and football in the state assured that he will use his position in to bring international matches to Ibadan saying it will not be too good to have such a world class stadia and been underutilised, so we have to make sure we use it.This I will ensure it happens but all necessary things needed must be put in place .

“But with what we have here ,this is a world class stadia and I heard the Gov is renovating some footblal pitches in all the senatorial centres in the state which is even a plus. Good thins is that the state has an airport,good road network which makes it stands out and at an advantage position to host an international matches. And do forget, our people. They are football crazy who have not watched such an international matvhes for so many years, so with what we have here,Ibadan will be mecca for footbal fans all over the world”, He said.